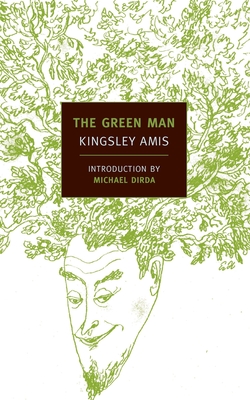 The owner of a haunted country inn contends with death, fatherhood, romantic woes, and alcoholism in this humorous and “rattling good ghost story” from a Booker Prize–winning author (The New York Times)

Maurice Allington has reached middle age and is haunted by death. As he says, “I honestly can’t see why everybody who isn’t a child, everybody who’s theoretically old enough to have understood what death means, doesn’t spend all his time thinking about it. It’s a pretty arresting thought.” He also happens to own and run a country inn that is haunted. The Green Man opens as Maurice’s father drops dead (had he seen something in the room?) and continues as friends and family convene for the funeral.

Maurice’s problems are many and increasing: How to deal with his own declining health? How to reach out to a teenage daughter who watches TV all the time? How to get his best friend’s wife in the sack? How to find another drink? (And another.) And then there is always death.

The Green Man is a ghost story that hits a live nerve, a very black comedy with an uncannily happy ending: in other words, Kingsley Amis at his best.

Michael Dirda is a longtime book columnist for The Washington Post and the author, most recently, of Classics for Pleasure and the 2012 Edgar Award–winning On Conan Doyle.

“A thoroughly contemporary ghost story . . . A splendid chiller, in the uncomplicated, old-fashioned sense. As one might expect from the author of Lucky Jim, The Green Man is also an extremely funny book, filled with slapstick, parody and satire. Indeed, the success of this short novel depends very much on the balance that Amis maintains between fear and laughter.”
—Robert Kiely, The New York Times

“What makes The Green Man readable and re-readable is the skill with which Amis, like Henry James before him, turns the narrative screw. It is, quite simply, a rattling good ghost story.”
—The Times (UK)

“Ghosts, exorcisms, sexual crises: even though first published back in 1969, Kingsley Amis's story The Green Man is as up-to-date as any trendy movie of the week. But Mr. Amis, something of an Evelyn Waugh-manque for our times, is after more than a passing chill or two. His hero ponders, through a boozy haze, nothing less than the meaning, or meaninglessness, of life.”
—The New York Times

“How rarely do we come across the really frightening ghost story now. Kingsley Amis's The Green Man was a rare and honourable exception, and Amis followed the classic pattern of earlier writers, letting the story progress carefully from a recognisable normality, through unease, to the rapid unfolding of horror that marks out the most successful and scarifying of all horror story writers.”
—The Guardian

“[A] powerful and to my mind much under-estimated ghost story.”
—Malcolm Bradbury

This feature require that you enable JavaScript in your browser.
END_OF_DOCUMENT_TOKEN_TO_BE_REPLACED

This feature require that you enable JavaScript in your browser.
END_OF_DOCUMENT_TOKEN_TO_BE_REPLACED

This feature require that you enable JavaScript in your browser.
END_OF_DOCUMENT_TOKEN_TO_BE_REPLACED