Shakespeare's Montaigne: The Florio Translation of the Essays, A Selection (Paperback) 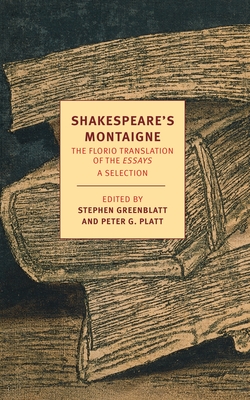 Shakespeare, Nietzsche wrote, was Montaigne’s best reader—a typically brilliant Nietzschean insight, capturing the intimate relationship between Montaigne’s ever-changing record of the self and Shakespeare’s kaleidoscopic register of human character. And there is no doubt that Shakespeare read Montaigne—though how extensively remains a matter of debate—and that the translation he read him in was that of John Florio, a fascinating polymath, man-about-town, and dazzlingly inventive writer himself.

Florio’s Montaigne is in fact one of the masterpieces of English prose, with a stylistic range and felicity and passages of deep lingering music that make it comparable to Sir Robert Burton’s Anatomy of Melancholy and the works of Sir Thomas Browne. This new edition of this seminal work, edited by Stephen Greenblatt and Peter G. Platt, features an adroitly modernized text, an essay in which Greenblatt discusses both the resemblances and real tensions between Montaigne’s and Shakespeare’s visions of the world, and Platt’s introduction to the life and times of the extraordinary Florio. Altogether, this book provides a remarkable new experience of not just two but three great writers who ushered in the modern world.

Michel de Montaigne (1533–1592) was born in Aquitaine, not far from Bordeaux, in the château of his wealthy aristocratic family. Educated by his father in Latin and Greek from an early age, Montaigne attended boarding school in Bordeaux before studying law in Toulouse. He then embarked on a distinguished public career, serving as a counselor of court in Périgueux and Bordeaux, becoming a courtier to Charles the IX, and receiving the collar of the Order of Saint Michael. After the death of his father in 1568, Montaigne succeeded to the title of Lord of Montaigne, and in 1571 he retired from public life in order to devote himself to reading and writing, publishing the first two volumes of his essays in 1580 and a third in 1588. From 1581 to 1585, he was the elected mayor of Bordeaux, confronting ongoing strife between Catholics and Protestants as well as an outbreak of the plague. Married to Françoise de Cassaigne, Montaigne was the father of six daughters, only one of whom survived into adulthood. He continued to write new essays and to add new material to the existing ones until the end of his life. The
complete essays appeared posthumously in 1595.

John Florio (1553–1625) was born in London, the son of Michelangelo Florio, a Tuscan convert to Protestantism who had moved to England because of his religious beliefs and who served as a language tutor to several highborn English families. Raised in Italian-speaking Switzerland and Germany, where his father fled after the Catholic Queen Mary I came to the English throne, John Florio returned to England during the reign of Queen Elizabeth I and followed in his father’s footsteps as an instructor of languages, teaching French and Italian at Magdalen College, Oxford, and, under King James I, working as a private tutor to the Crown Prince and the Queen Consort. Florio’s works include First Fruits, which yield Familiar Speech, Merry Proverbs, Witty Sentences, and Golden Sayings; A Perfect Induction to the Italian and English Tongues; Second Fruits, to be gathered of Twelve Trees, of divers but delightsome Tastes to the Tongues of Italian and English men; Garden of Recreation, yielding six thousand Italian Proverbs; an Italian–English dictionary, A World of Words (the second edition of which was entitled Queen Anna’s New World of Words); and his celebrated translation of Montaigne’s Essays.

Stephen Greenblatt is the author of, among other books, Will in the World: How Shakespeare Became Shakespeare and The Swerve: How the World Became Modern (winner of the National Book Award, the James Russell Lowell Award, and the Pulitzer Prize). He is the John Cogan University Professor of the Humanities at Harvard.

"Stephen Greenblatt and Peter Platt have annotated selections in Shakespeare's Montaigne and the result is a crash course in Elizabethan lit, a multiculti study of the development of English, and, above all, a revisionist biography of a monumental dramatist who not only cribbed the classical education he lacked but also responded to his sources with a fierce and censorious intelligence." —Joshua Cohen, Harper's Magazine

“Like Montaigne, Florio wrote by exuding ever more complex thoughts as a spider exudes silk. But while Montaigne always moves forward, Florio winds back on himself and scrunches his sentences into ever tighter baroque spirals until their meaning disappears in a puff of syntax. The real magic happens when the two writers meet. Montaigne’s earthiness holds Florio’s convolutions in check, while Florio gives Montaigne an Elizabethan English quality, as well as a lot of sheer fun.” —Sarah Bakewell, How to Live, or, A Life of Montaigne

“He was the first who had the courage to say as an author what he felt as a man.” —William Hazlitt

“That such a man wrote has truly augmented the joy of living on Earth.” —Friedrich Nietzsche

“Montaigne is the frankest and honestest of all writers.” —Ralph Waldo Emerson

“I defy any reader of Montaigne not to put down the book at some point and say with incredulity: ‘How did he know all that about me?’ ” —Bernard Levin, The Times (London)

“So much have I made him my own, that it seems he is my very self.” —André Gide

“Here is a ‘you’ in which ‘I’ is reflected; here is where all distance is abolished.” —Stefan Zweig

“It is not in Montaigne but in myself that I find everything I see there.” —Blaise Pascal

“Upon his version of Montaigne’s Essays [Florio] exhausted his gifts and lavished his temperament. ...Turn where you will in his translation, and you will find flowers of speech.” —The Cambridge History of English and American Literature

This feature require that you enable JavaScript in your browser.
END_OF_DOCUMENT_TOKEN_TO_BE_REPLACED

This feature require that you enable JavaScript in your browser.
END_OF_DOCUMENT_TOKEN_TO_BE_REPLACED

This feature require that you enable JavaScript in your browser.
END_OF_DOCUMENT_TOKEN_TO_BE_REPLACED