The Greek Revolution: 1821 and the Making of Modern Europe (Hardcover) 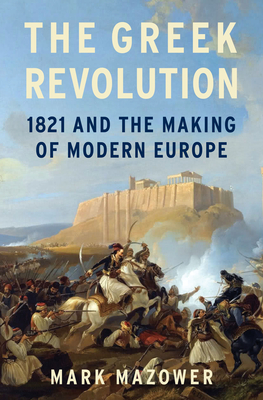 From one of our leading historians, an important new history of the Greek War of Independence—the ultimate worldwide liberal cause célèbre of the age of Byron, Europe’s first nationalist uprising, and the beginning of the downward spiral of the Ottoman Empire—published two hundred years after its outbreak

As Mark Mazower shows us in his enthralling and definitive new account, myths about the Greek War of Independence outpaced the facts from the very beginning, and for good reason. This was an unlikely cause, against long odds, a disorganized collection of Greek patriots up against what was still one of the most storied empires in the world, the Ottomans. The revolutionaries needed all the help they could get. And they got it as Europeans and Americans embraced the idea that the heirs to ancient Greece, the wellspring of Western civilization, were fighting for their freedom against the proverbial Eastern despot, the Turkish sultan. This was Christianity versus Islam, now given urgency by new ideas about the nation-state and democracy that were shaking up the old order. Lord Byron is only the most famous of the combatants who went to Greece to fight and die—along with many more who followed events passionately and supported the cause through art, music, and humanitarian aid. To many who did go, it was a rude awakening to find that the Greeks were a far cry from their illustrious forebears, and were often hard to tell apart from the Ottomans.

Mazower does full justice to the realities on the ground as a revolutionary conspiracy triggered outright rebellion, and a fraying and distracted Ottoman leadership first missed the plot and then overreacted disastrously. He shows how and why ethnic cleansing commenced almost immediately on both sides. By the time the dust settled, Greece was free, and Europe was changed forever. It was a victory for a completely new kind of politics—international in its range and affiliations, popular in its origins, romantic in sentiment, and radical in its goals. It was here on the very edge of Europe that the first successful revolution took place in which a people claimed liberty for themselves and overthrew an entire empire to attain it, transforming diplomatic norms and the direction of European politics forever, and inaugurating a new world of nation-states, the world in which we still live.

Mark Mazower is the Ira D. Wallach Professor of History at Columbia University. He is the author of Hitler’s Empire and The Balkans: A Short History, winner of the Wolfson Prize for History, among other books. He lives in New York City.

“[A] pulsating narrative . . . rich with social history and the luminaries of the age . . . The Greek Revolution causes us to think more deeply about the role of the nation-state in a global context. . . . It is hard to imagine it being surpassed any time soon as the definitive English-language account of the Greek Revolution.” —New York Times Book Review

“[A] superb new history of the rebellion and its broader implications. . . . A compelling story—full of conflicting characters, rivalries, massacres, betrayals, enslavements—all of which [Mazower] narrates with earned authority and exceptional power. . . . He achieves more clarity on this tangled subject than other historians in English have managed before.” —Wall Street Journal

“Elegant and rigorous . . . [The Greek Revolution] holds lessons for modern geopolitics: about the galvanising effects of violence, the role of foreign intervention and the design flaws in dreams.” —The Economist

“Mazower tells the story as it always needed to be told. . . . The Greek Revolution offers the best and fullest explanation, to date, for a series of events whose effects would change the entire geopolitics of Europe. Written with compassion and understanding for the human cost of that achievement, it deserves to remain the standard treatment of the subject in English for many decades to come.” —The Times Literary Supplement

“Mazower contextualizes a major transformation in 19th-century Eastern Europe for readers of European history and provides a solid background of modern Greece for students of ancient history.” —Library Journal

“Broad in scope and colorful in detail, this is a masterful portrait of a historic watershed. . . . [A] sweeping history of Greece’s 1821 war of independence against the Ottoman Empire. [Mazower] recounts the revolution’s inception among Greek emigrés with an idealistic dream of Hellenic nationalism and its actuality as a murky, eight-year struggle fought mainly by peasants and warlords who were motivated less by patriotism than by religious hatred of Muslims, factional vendettas, and mercenary self-interest . . . [A] lucid, elegantly written, and often gripping account.” —Publishers Weekly (starred review)

“On the bicentennial of the Greek revolution, a prominent scholar tracks the historical detail and enormous international significance of the improbable, largely grassroots uprising against the Ottoman Empire. Mazower, a Columbia professor and winner of the Wolfson Prize for History who has written extensively about Greece and the Balkans, ably ties together the many disparate threads of this complex history of Greek independence. . . . An elucidating history that is relevant to understanding the geopolitics of Greece today . . . [The Greek Revolution] will prove indispensable to scholars.” —Kirkus

“Mazower has constructed out of all this [new research] an epic narrative, both scholarly, breathlessly page-turning and packed with hauntingly romantic characters. Few historians dig so deep or with such sympathy into what history felt like to those living through it.” —The Tablet

This feature require that you enable JavaScript in your browser.
END_OF_DOCUMENT_TOKEN_TO_BE_REPLACED

This feature require that you enable JavaScript in your browser.
END_OF_DOCUMENT_TOKEN_TO_BE_REPLACED

This feature require that you enable JavaScript in your browser.
END_OF_DOCUMENT_TOKEN_TO_BE_REPLACED