The Disneyland Book of Lists (Paperback) 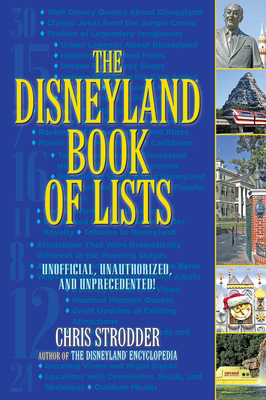 Chris Strodder is the author of The Disneyland(R) Encyclopedia, which was named a "Best Reference Book" by Library Journal. His other works include the pop culture compendiums The Encyclopedia of Sixties Cool and Swingin' Chicks of the '60s. Strodder has also written the children's book A Sky for Henry, the adventure story for young adults Lockerboy, the comic novel The Wish Book, the Stories Light and Dark collection of short fiction, and articles for various periodicals, including Los Angeles and California magazines. Strodder first visited Disneyland(R) in 1966 and has been collecting Disneyland(R) souvenirs and ephemera ever since. He lives in the green hills of Mill Valley, California.

This feature require that you enable JavaScript in your browser.
END_OF_DOCUMENT_TOKEN_TO_BE_REPLACED

This feature require that you enable JavaScript in your browser.
END_OF_DOCUMENT_TOKEN_TO_BE_REPLACED

This feature require that you enable JavaScript in your browser.
END_OF_DOCUMENT_TOKEN_TO_BE_REPLACED