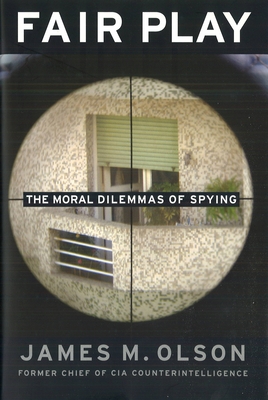 Olson, a veteran of the CIA’s clandestine service, takes readers inside the real world of intelligence to describe the difficult dilemmas that field officers face on an almost daily basis. Far from being a dry theoretical treatise, this fascinating book uses actual intelligence operations to illustrate how murky their moral choices can be. Readers will be surprised to learn that the CIA provides very little guidance on what is, or is not, permissible. Rather than empowering field officers, the author has found that this lack of guidelines actually hampers operations. Olson believes that U.S. intelligence officers need clearer moral guidelines to make correct, quick decisions. Significantly, he believes these guidelines should come from the American public, not from closed-door meetings inside the intelligence community. Fair Play will encourage a broad public debate about the proper moral limits on U.S. intelligence activities.
Purchase the audio edition.

I was born and raised in Iowa. I studied mathematics and economics at the University of Iowa. I then took a commission in the U.S. Navy, serving aboard guided missiles destroyers and frigates. After that, I returned to Iowa to study law at the University of Iowa. I had every intention of practicing law in a small county seat town in Iowa when the CIA approached me and invited me to apply for a position in the clandestine service.

"A thoughtful, provocative analysis of practically every possible moral dilemma that is ever likely to prick the conscience of an assiduous case officer. The scenarios presented by James Olson, himself a veteran insider, have the authentic whiff of cordite that suggest little has been drawn from his imagination, but much has been looted from the operational files."—Nigel West, author of The Third Secret: The CIA, Solidarity and the KGB's Plot to Kill the Pope
— Nigel West

"James Olson is a legend in the clandestine service, having served in some of the most difficult, dangerous, and complicated assignments at the height of the Cold War. As director of central intelligence, I trusted him without reservation when he was chief of counterintelligence not only because he was enormously capable but also because I knew he thought deeply about the ethical and moral dimensions of what we did every day. Amid the countless books and memoirs of retired spies, especially at this time, this one is essential reading."—Robert M. Gates, Director of Central Intelligence, 1991-1993
— Robert M. Gates

"Under veteran intelligence officer James Olson’s sure direction, the reader enters a world few Americans ever see or even know exists. From his insightful summary of intelligence history through each of his fifty reality-based scenarios, he confronts the difficult ethical issues head-on. An unprecedented examination of the challenging moral dilemmas of human intelligence operations, Olson’s work will soon be the standard reference."—Peter Earnest, executive director, International Spy Museum, and former CIA officer
— Peter Earnest

"James Olson has deftly plumbed the depths of the spy’s dilemma: How can one spend a lifetime practicing deception and still retain a strong moral compass? Fair Play is the primer on how to balance a little bit of evil so it will yield the maximum benefit to the common good. A must read."—Antonio J. Mendez, former CIA officer and author of The Master of Disguise: My Secret Life in the CIA
— Antonio J. Mendez

"Do the ends ever justify the means? CIA veteran James Olson explores the complex choices, limitations, and moral dilemmas facing U.S. intelligence officers who attempt to operate within an ill-defined standard of ‘acceptable moral behavior.’ Fascinating and thought provoking, Fair Play will become a must-read for officers on the frontlines of the global war on terror. There isn’t anything else like it!"—H. Keith Melton, intelligence historian and author of Ultimate Spy
— H. Keith Melton

This feature require that you enable JavaScript in your browser.
END_OF_DOCUMENT_TOKEN_TO_BE_REPLACED

This feature require that you enable JavaScript in your browser.
END_OF_DOCUMENT_TOKEN_TO_BE_REPLACED

This feature require that you enable JavaScript in your browser.
END_OF_DOCUMENT_TOKEN_TO_BE_REPLACED