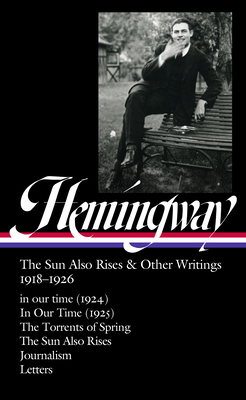 Library of America launches its long-awaited Hemingway edition with a landmark collection of writings from his breakthrough years, in newly edited, authoritative texts.

With a letter of introduction from Sherwood Anderson, Ernest Hemingway travelled to Paris in 1921. There, he ame into contact with Gertrude Stein, F. Scott Fitzgerald, Pablo Picasso, James Joyce, and other expatriate writers and artists integral to his rapid development as a writer. This volume brings together work from the extraordinary period of 1918 to 1926, in which Hemingway's famous prose style became fully formed. It includes his work for the Toronto Star and Hearst's International News Service, the indelible stories of In Our Time (1925), The Torrents of Spring (1925), and his masterpiece, The Sun Also Rises (1926).

Edited by Hemingway scholar Robert W. Trogdon, this volume features newly edited, corrected texts of In Our Time, The Torrents of Spring and The Sun Also Rises, fixing errors and restoring Hemingway’s original punctuation. It presents the 1924 edition of in our time issued by Three Mountains Press as a modernist masterpiece in its own right, apart from the subsequent versions published by Boni & Liveright and Scribners. It includes the story “Up in Michigan,” one of only a few stories dating from the period before 1923 that was not lost in Hemingway’s suitcase in the Gare de Lyon and that was originally intended as the opening story of In Our Time, and the hard-to-find, previously uncollected story “A Divine Gesture.” Also here are a selection of Hemingway’s letters from the period, which cast light on his breakthrough years and at the extraordinary international modernist moment of which he was a crucial part.

Born in the Chicago suburb of Oak Park Illinois in 1899, Ernest Hemingway left home at seventeen to become a reporter for the Kansas City Star, then served as a Red Cross volunteer on the Italian front, where he suffered shrapnel wounds. He moved to Paris in 1921 and became part of an international expatriate scene that included Gertrude Stein and F. Scott Fitzgerald. Among his numerous books are In Our Time (1925), The Sun Also Rises (1926), A Farewell to Arms (1929), and For Whom the Bell Tolls (1940). Hemingway took his life in Ketchum, Idaho in 1961.


Robert W. Trogdon is Chair of the English Department at Kent State University and a leading scholar of 20th Century American Literature and textual editing. He has published extensively on the works of Ernest Hemingway. He serves as an editor of The Cambridge Edition of the Letters of Ernest Hemingway.

This feature require that you enable JavaScript in your browser.
END_OF_DOCUMENT_TOKEN_TO_BE_REPLACED

This feature require that you enable JavaScript in your browser.
END_OF_DOCUMENT_TOKEN_TO_BE_REPLACED

This feature require that you enable JavaScript in your browser.
END_OF_DOCUMENT_TOKEN_TO_BE_REPLACED