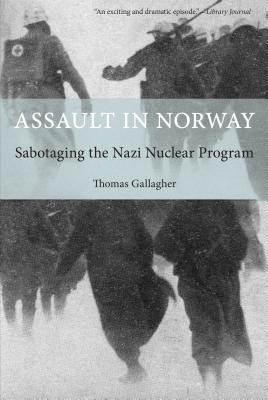 "An exciting and dramatic episode."-Library Journal "Cliff-hanging suspense."-Christian Science Monitor Assault in Norway is the classic account of a legendary raid on the Nazi war program. By 1942 Germany had a seemingly insurmountable lead over the Allies in developing an atomic bomb. Contributing to this situation was its access to a crucial ingredient: "heavy water," found in great abundance at a fortresslike factory in occupied Norway. Allied hopes of stalling the Nazi nuclear program soon focused on sabotaging the cliffside plant-a suicidal mission. But a team of brave Norwegian exiles, trained in Britain, infiltrated their homeland and, hiding in the wilds, awaited the opportunity to launch one of the war's most daring commando raids. Basing his gripping narrative in large part on interviews with the commandos themselves, Thomas Gallagher recounts in vivid detail the planning and execution of Operation Gunnerside. Assault in Norway recalls the intrigue found in such wartime classics as David Howarth's We Die Alone and The Sledge Patrol, and the mission it recounts inspired the 1965 Hollywood film The Heroes of Telemark.

Thomas Gallagher (1918-1992) was a widely published journalist and the author of eight books, including The Gathering Darkness (1952), which was nominated for a National Book Award; and Fire at Sea: The Story of the Moro Castle (1959), which won the Edgar Allan Poe Award for nonfiction.

This feature require that you enable JavaScript in your browser.
END_OF_DOCUMENT_TOKEN_TO_BE_REPLACED

This feature require that you enable JavaScript in your browser.
END_OF_DOCUMENT_TOKEN_TO_BE_REPLACED

This feature require that you enable JavaScript in your browser.
END_OF_DOCUMENT_TOKEN_TO_BE_REPLACED