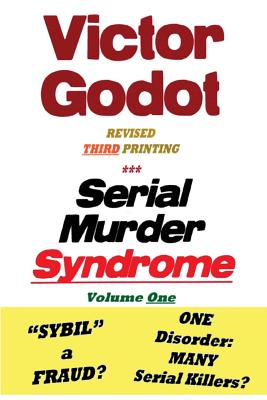 Who would have believed that, 10 years ago, the famous multiple personality, "Sybil" would turn out to be a total scam and a fake, and that once famous, "Multiple Personalities" would suddenly disappear from both news and headlines, after judges previously allowed them to testify in open court? (Who's innocent and in prison NOW?)

This book shows that, indeed, there ARE, in fact, "Multiple Personalities" - just not the ones brayed about in those highly popular, quasi-pornographic women's paperbacks of the 50's, 60's and 70's. As it turns out, there is a very REAL disorder out there that can "hi-jack" a personality, and turn it "mean." It's a form of epilepsy known as "Geschwind's Syndrome" and MULTIPLE serial killers have suffered from it.

You may have always wondered about why serial killers always seem to go after the so-called, "composite woman." This has been solved with the discovery of the disorder known as "Limerence." Limerence is NOT "love," but a vicious, obsessive compulsive disorder that affects upwards of 5% of the world's population.

For those of you still wondering why the massacre in Las Vegas occurred, you should study the behaviors of George Metesky, The "Mad Bomber" of New York during the 1930's, 40's and 50's. It's the SAME form of brain damage and the SAME bureaucratic incompetence.

If you think you know what happened to Phil Spector and the 2003 murder of "B" movie actress, Lana Clarkson, think again. The reasons include the Mob, abandonment issues, massive levels of paranoia and near-murderous ritual.

The behavior of serial killers doesn't come "from out of nowhere." This book can show you what must happen FIRST, before the violence follows - which means it CAN be PREVENTED if you just open your eyes.

This feature require that you enable JavaScript in your browser.
END_OF_DOCUMENT_TOKEN_TO_BE_REPLACED

This feature require that you enable JavaScript in your browser.
END_OF_DOCUMENT_TOKEN_TO_BE_REPLACED

This feature require that you enable JavaScript in your browser.
END_OF_DOCUMENT_TOKEN_TO_BE_REPLACED