Zen: A Short Introduction with Illustrations by the Author (Hardcover) 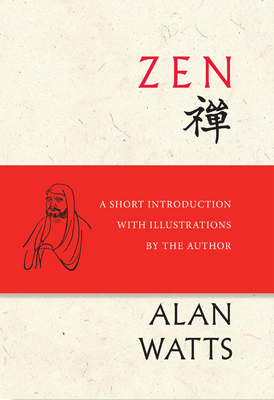 According to Alan Watts, "Zen taste deplores the cluttering of a picture or of a room with many objects." In that sense, this minimalist book embodies the aesthetic of Zen itself. As with brushstrokes in a Japanese ink painting, the words have been used sparingly and arranged precisely, with no unnecessary detail. In seven brief chapters, Watts captures the essence of Zen Buddhism as a religion and a way of life. He explains fundamental Zen concepts, introduces revered Zen thinkers, places Zen within the broader context of Eastern religion, and traces the influence of Zen in the arts. Illustrated with calligraphy and drawings by the author, this reprint of an old classic will delight fans of Alan Watts, while introducing new readers to a legendary author who infused groundbreaking scholarship with literary brilliance.

Through his books and lectures, Alan Watts (1915-1973) introduced millions of Westerners to Eastern philosophies such as Vedanta, Taoism, and Zen Buddhism. Born in England, Watts immigrated to the United States in his twenties, worked as a chaplain and teacher, and wrote more than twenty books, including the bestselling The Wisdom of Insecurity.

This feature require that you enable JavaScript in your browser.
END_OF_DOCUMENT_TOKEN_TO_BE_REPLACED

This feature require that you enable JavaScript in your browser.
END_OF_DOCUMENT_TOKEN_TO_BE_REPLACED

This feature require that you enable JavaScript in your browser.
END_OF_DOCUMENT_TOKEN_TO_BE_REPLACED