Postcards from the End of America (Paperback) 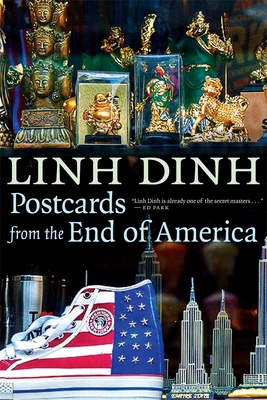 Roaming the country by bus and train, on a budget and without any institutional support, Linh Dinh set out to document, in words and pictures, what life is like for people. From Los Angeles, Cheyenne, Portland, and New Orleans, to Jackson and Wolf Point--Linh walked miles and miles through unfamiliar neighborhoods, talking to whoever would talk to him: the homeless living in tent cities, the peddlers, the protestors, the public preachers, the prostitutes. With the uncompromising eye of a Walker Evans or a Dorothea Lange, and the indomitable, forthright prose of a modern-day Nelson Algren or James Agee, Dinh documents the appalling and the absurd with warmth and honesty, giving voice to America's often forgotten citizens and championing the awesome strength it takes to survive for those on the bottom.

Growing out of a photo and political writing blog Linh has maintained since 2009, Postcards from the End of America is an unflinching diary of what Linh sees as the accelerating collapse of America. Tracking the economic, political, and social unraveling--from the casinos to the abandoned factories and over all the sidewalks in between--with a poet's incisive tongue, Linh shows us the uncanny power of the people in the face of societal devastation.

A recipient of a Pew Foundation grant, a David T. Wong Fellowship, a Lannan Residency and, most recently, the Asian American Literary Award, LINH DINH was born in Saigon in 1963 and emigrated to the United States in 1975. An acclaimed and provocative writer of short stories and contemporary fables, he is also the author of several books of poems and a novel, Love Like Hate. Linh has edited the anthologies Night, Again: Contemporary Fiction from Vietnam and Three Vietnamese Poets. His collection of stories, Blood and Soap was chosen by the Village Voice as one of the Best Books of 2004. Linh's nonfiction essays have been published regularly at Unz Review, LewRockwell, Intrepid Report and CounterCurrents, and his blog, Postcards from the End of America (linhdinhphotos.blogspot.com), is followed by thousands of readers. He has also published widely in Vietnamese.

"Linh Dinh's Postcards from the End of America is a collection of some of the most brilliant observations penned on the terminal decline of the American empire. He gives a voice to those rendered invisible by a bankrupt corporate press. He has an unflinching honesty, refusing to romanticize the poor while also writing with great empathy about their lives. He lays bare the predatory evil of corporate capitalism, the death of liberty engendered by our security and surveillance state and the human cost of our system of inverted totalitarianism. He would make George Orwell or Joseph Roth proud. There are few writers in America I admire more." —Chris Hedges, author of Wages of Rebellion: The Moral Imperative of Revolt

"Linh Dinh’s Postcards From the End of America, which chronicles a declining America through the author’s travels among the down and out. Perhaps many liberal and leftist writers think they should reach out to this part of our country, but Linh Dinh is one of the few to do it." —Viet Thanh Nguyen, answering "What do you plan to read next?" in The New York Times Book Review

"If this nation’s ego is represented by the politicians, then its collective unconscious is riding in the seat next to Linh Dinh’s on the Greyhound bus, or slumping on the neighboring stool in the dive bar. In these—what do we call them? new-journalist epistles? prose poems? revelatory philippics? absurdist love letters?—Dinh introduces us to the legion of people not encompassed by any candidate’s plan for economic recovery. This book is a howl of joy and a laugh of despair." —Matthew Sharpe, author of Jamestown and The Sleeping Father

"In today's celebrity-obsessed culture so focused on the antics of the wealthy and the famous, Linh Dinh stands as one of the only chroniclers of the gritty underside of our society, a very worthy successor to Jacob Riis of New York City's Gilded Age.  In our increasingly impoverished country, if you want to understand the life of the other half—or the other two-thirds—there are few better guides to the texture of those dismal streets and alleys than Postcards from the End of America." —Ron Unz, Silicon Valley entrepreneur and publisher of The Unz Review


“Linh Dinh is already one of the secret masters of short fiction.” –Ed Park, editor of the Believer and author of Personal Days

This feature require that you enable JavaScript in your browser.
END_OF_DOCUMENT_TOKEN_TO_BE_REPLACED

This feature require that you enable JavaScript in your browser.
END_OF_DOCUMENT_TOKEN_TO_BE_REPLACED

This feature require that you enable JavaScript in your browser.
END_OF_DOCUMENT_TOKEN_TO_BE_REPLACED