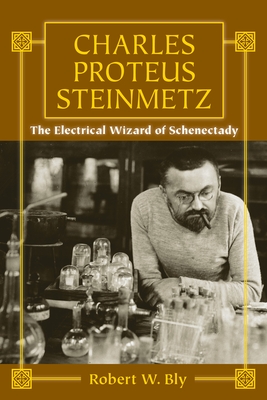 A genius to rival Edison, a personality as intriguing as Tesla, Charles Proteus Steinmetz was a key figure in creating the modern world.

Thomas Alva Edison and Nikola Tesla have the glory, but perhaps the greatest electrical wizard of them all was Charles Proteus Steinmetz. Revered in the late 19th and early 20th centuries as a genius, but largely forgotten today, Steinmetz made the modern world possible through his revolutionary work on AC electricity transmission, the technology underlying today's power grid. More than just a great scientist and engineer, Steinmetz was also one of the most colorful characters in American life.

Standing just four feet tall with a pronounced spine curvature, Steinmetz was as well known for his fiery political opinions, his fierce advocacy for social progress and education, his unusual home life, and his private menagerie as for his technical achievements. The first full biography of Steinmetz in many years, Charles Proteus Steinmetz: The Electrical Wizard of Schenectady brings the life, passions, and scientific achievement of this remarkable man to a new generation.

This feature require that you enable JavaScript in your browser.
END_OF_DOCUMENT_TOKEN_TO_BE_REPLACED

This feature require that you enable JavaScript in your browser.
END_OF_DOCUMENT_TOKEN_TO_BE_REPLACED

This feature require that you enable JavaScript in your browser.
END_OF_DOCUMENT_TOKEN_TO_BE_REPLACED