"Too Much for Human Endurance": The George Spangler Farm Hospitals and the Battle of Gettysburg (Paperback) 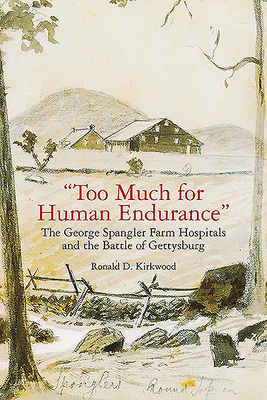 The bloodstains are gone, but the worn floorboards remain. The doctors, nurses, and patients who toiled and suffered and ached for home at the Army of the Potomac's XI Corps hospital at the George Spangler farm in Gettysburg have long since departed. Fortunately, what they experienced there, and the critical importance of the property to the battle, has not been lost to history. Noted journalist and George Spangler farm expert Ronald D. Kirkwood brings these people and their experiences to life in "Too Much for Human Endurance" The George Spangler Farm Hospitals and the Battle of Gettysburg.

Using a large array of firsthand accounts, Kirkwood re-creates the sprawling XI Corps hospital complex and the people who labored and suffered there--especially George and Elizabeth Spangler and their four children, who built a thriving 166-acre farm only to witness it nearly destroyed when war paid a bloody visit in the summer of 1863. Stories rarely if ever told about the wounded, dying, nurses, surgeons, ambulance workers, musicians, and others are weaved seamlessly through gripping and smooth-flowing prose.

A host of notables spent time at the Spangler farm, including Union officers George G. Meade, Henry J. Hunt, Edward E. Cross, Francis Barlow, Francis Mahler, Freeman McGilvery, and Samuel K. Zook. Pvt. George Nixon III, great-grandfather of President Richard M. Nixon, would die there, as would Confederate Gen. Lewis A. Armistead, who fell mortally wounded at the height of Pickett's Charge. In addition to including the most complete lists ever published of the dead, wounded, and surgeons at the Spanglers' XI Corps hospital, this study breaks new ground with stories of the First Division, II Corps hospital at the Spanglers' Granite Schoolhouse.

Kirkwood also establishes the often-overlooked strategic importance of the property and its key role in the Union victory. Army of the Potomac generals took advantage of the farm's size, access to roads, and central location to use it as a staging area to get artillery and infantry to the embattled front line from Little Round to Cemetery Hill and Culp's Hill, often just in time to prevent a collapse and Confederate breakthrough.

"Too Much for Human Endurance" - now in paperback, introduces readers to heretofore untold stories of the Spanglers, their farm, those who labored to save lives, and those who suffered and died there. They have finally received the recognition that their place in history deserves.

This feature require that you enable JavaScript in your browser.
END_OF_DOCUMENT_TOKEN_TO_BE_REPLACED

This feature require that you enable JavaScript in your browser.
END_OF_DOCUMENT_TOKEN_TO_BE_REPLACED

This feature require that you enable JavaScript in your browser.
END_OF_DOCUMENT_TOKEN_TO_BE_REPLACED