I Am Soldier of Fortune: Dancing with Devils (Paperback) 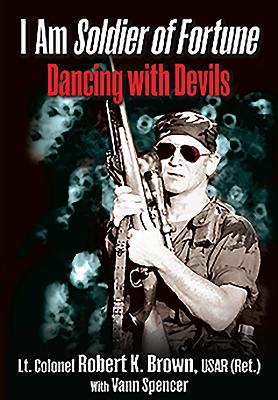 "Bob Brown's book is well named. It is, on one hand, a concise chronological history of a unique American publishing venture, and on the other, an autobiography of a maverick soldier and his bizarre assortment of cronies. Above all, it is a great read."--American Rifleman "I Am Solider of Fortune" is a half-century of history told from ground level. The higher value, though, may be in the perspective it offers on the warrior culture. From the outside, it is easy to believe every soldier of fortune, every 'private security contractor, ' is a Rambo-style wild man, pumped on testosterone. Some of the characters passing through Mr. Brown's book are that. Others are darkly sinister. Most are measured, disciplined professionals who understand both risk and principle.... At 80, Robert K. Brown stands as a central figure in a shadow world of secrecy and myth. His book opens that world to readers on the outside. There are many who don't like Soldier of Fortune magazine and the culture of rogue warrior exploits it represents. Bob Brown doesn't care."--The Washington Times Robert K. Brown, former Green Beret, after a bizarre military career that succeeded in getting him kicked out of Special Forces not once but twice, and completing the Command and General Staff College without a security clearance, while meantime being wounded in Nam, finally found his true calling as a publisher. Forty years ago he launched an upstart magazine from his basement called Soldier of Fortune, which pushed the bounds of journalism to its limits with his untamed brand of reporting―a camera in one hand, a gun in the other, and soon thereafter he discovered that he'd established a worldwide community. His notorious magazine became an icon for action-seekers in the U.S. and around the world. In this book Brown tells his own story, taking the readers into combat zones where he and his "dogs of war" trotted across the globe. His rogue warrior journalists embedded themselves with anti-Communist guerillas or freedom fighters, often training and fighting with rebels against oppressive regimes. In their revolutionary journalistic style, they created the action and then wrote about it. This is the story of Robert Brown's dogged quest, in journalism as well as warfare, to "Slay Dragons, do noble deeds and never, never give up.

This feature require that you enable JavaScript in your browser.
END_OF_DOCUMENT_TOKEN_TO_BE_REPLACED

This feature require that you enable JavaScript in your browser.
END_OF_DOCUMENT_TOKEN_TO_BE_REPLACED

This feature require that you enable JavaScript in your browser.
END_OF_DOCUMENT_TOKEN_TO_BE_REPLACED