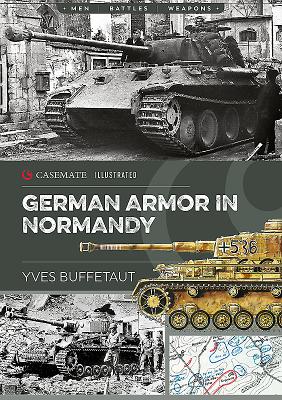 Throughout the Second World War, a shift occurred in the composition of the large armored units of armies which lead to an increase in the power of their tanks in particular. The Germans were no exception. Many of its recently formed Panzer divisions, from the 12th SS-Panzerdivision Hitlerjugend to the 2nd SS-Panzerdivision Das Reich, were thrust into the effort to repel the Allies from June to August 1944 in Normandy. Within just ten weeks they would be defeated. This volume of Casemate Illustrated starts by exploring the initial struggle to gain control of Caen after the Allies had landed on the beaches of Normandy which resulted in the ferocious German Tiger tanks destroying the 7th Armored Division, with British losses totaling twenty-seven tanks. The subsequent strategies the commanders devised for the Panzer tanks during Operations Goodwood and Cobra were not so successful, ultimately ending in disaster for the Germans as the Allies broke through the German line by the end of July. With over 100 photos, diagrams showing the composition of German armored divisions, and color profiles of tanks and other armored vehicles, this is a detailed examination of the German armored forces in Normandy in 1944, focusing on the organization of the 10 Panzer divisions that took part, the vehicles they relied on and the battles they fought in and why ultimately their combined strength was not enough.

This feature require that you enable JavaScript in your browser.
END_OF_DOCUMENT_TOKEN_TO_BE_REPLACED

This feature require that you enable JavaScript in your browser.
END_OF_DOCUMENT_TOKEN_TO_BE_REPLACED

This feature require that you enable JavaScript in your browser.
END_OF_DOCUMENT_TOKEN_TO_BE_REPLACED