Blood Money: Stories of an Ex-Recce's Missions in Iraq (Hardcover) 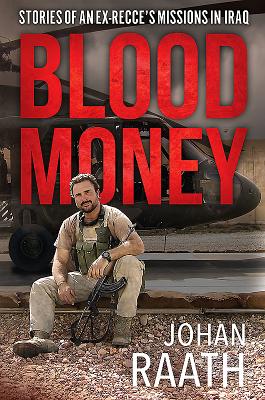 'I remember the cracking sound of the AK-47 bullets as they tore through our windscreen . . . A piece of bullet struck my bulletproof vest in the chest area and another piece broke off and lodged in my left forearm.' Johan Raath and a security team were ambushed in May 2004 while on a mission to reconnoitre a power plant south of Baghdad for an American firm. He had been in the country for only two weeks. This was a taste of what was to come over the next few years as he worked as a private military contractor (PMC) in Iraq. His mission? Not to wage war but to protect lives. Raath and his team provided security for engineers working on reconstruction projects in Iraq. Whether in the notorious Triangle of Death, in the deadly area around Ramadi or in the faction-ridden Basra, Raath had numerous hair-raising experiences. Key to his survival was his training as a Special Forces operator, or Recce. This riveting account offers a rare glimpse into the world of private military contractors and the realities of everyday life in one of the world's most violent conflict zones.

This feature require that you enable JavaScript in your browser.
END_OF_DOCUMENT_TOKEN_TO_BE_REPLACED

This feature require that you enable JavaScript in your browser.
END_OF_DOCUMENT_TOKEN_TO_BE_REPLACED

This feature require that you enable JavaScript in your browser.
END_OF_DOCUMENT_TOKEN_TO_BE_REPLACED