Lion in the Bay: The British Invasion of the Chesapeake, 1813-14 (Hardcover) 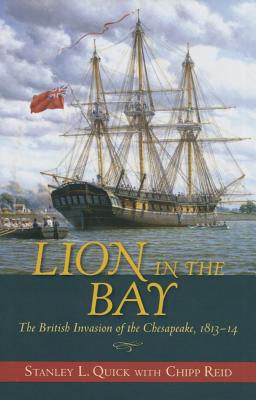 The story of Fort McHenry's defense during the War of 1812 is well known, but Lion in the Bay is an intimate look at the events leading up to the battle that inspired our national anthem. As the War of 1812 raged on the high seas and along the Canadian border, the British decided to strike at the heart of the United States, the relatively undefended area of the Chesapeake Bay. The Chesapeake was a fertile farm region, a place of renowned shipbuilding, and an area politically divided over the war. Plus, if the British succeeded in taking the bay, the nation's capital was not far away. Admiral George Cockburn led the British into the bay following a failed attempt to take Norfolk, Virginia. Originally intended to relieve pressure on other fronts, the Chesapeake theater became a British campaign of retribution for the burning of York (present day Toronto) by the Americans in 1812. As a result, the Chesapeake region, once an economic engine for America, was transformed into a region of terrorized citizens, destroyed farms, and fears of slave insurrection.

In August 1814, President James Madison refused to bolster the defenses on the waterway that led to Washington, and the British took advantage. Cockburn again led a naval force into the bay, this time running into opposition from Commo. Joshua Barney and his Chesapeake Bay Flotilla. Barney put up a heroic, though doomed fight before the British sailed up the Patuxent River and landed at Benedict, Maryland, where over 4,000 troops disembarked to begin their advance toward Washington, D.C.

After defeating the Americans at the Battle of Bladensburg, the British moved into Washington, burning the city, before returning to their boats and setting out for Baltimore. There, the British armada encountered a stalwart group of American defenders at Fort McHenry. Despite a massive bombardment, Baltimore's defenses held, forcing the British to abandon their campaign to close the Chesapeake. More than just an in-depth look at one front of the War of 1812, Lion in the Bay is a story of resilience and triumph in the wake of catastrophe.

This feature require that you enable JavaScript in your browser.
END_OF_DOCUMENT_TOKEN_TO_BE_REPLACED

This feature require that you enable JavaScript in your browser.
END_OF_DOCUMENT_TOKEN_TO_BE_REPLACED

This feature require that you enable JavaScript in your browser.
END_OF_DOCUMENT_TOKEN_TO_BE_REPLACED