Paper Bullets: Two Artists Who Risked Their Lives to Defy the Nazis (Hardcover) 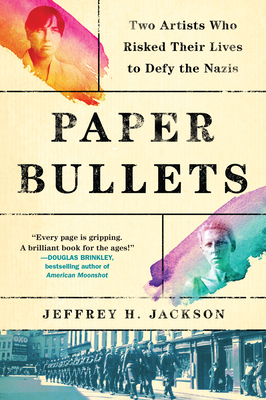 “A Nazi resistance story like none you’ve ever heard or read.” —Hampton Sides, author of Ghost Soldiers and On Desperate Ground

"Every page is gripping, and the amount of new research is nothing short of mind-boggling. A brilliant book for the ages!” —Douglas Brinkley, author of American Moonshot

Paper Bullets is the first book to tell the history of an audacious anti-Nazi campaign undertaken by an unlikely pair: two French women, Lucy Schwob and Suzanne Malherbe, who drew on their skills as Parisian avant-garde artists to write and distribute “paper bullets”—wicked insults against Hitler, calls to rebel, and subversive fictional dialogues designed to demoralize Nazi troops occupying their adopted home on the British Channel Island of Jersey. Devising their own PSYOPS campaign, they slipped their notes into soldier’s pockets or tucked them inside newsstand magazines.

Hunted by the secret field police, Lucy and Suzanne were finally betrayed in 1944, when the Germans imprisoned them, and tried them in a court martial, sentencing them to death for their actions. Ultimately they survived, but even in jail, they continued to fight the Nazis by reaching out to other prisoners and spreading a message of hope.

Better remembered today by their artist names, Claude Cahun and Marcel Moore, the couple’s actions were even more courageous because of who they were: lesbian partners known for cross-dressing and creating the kind of gender-bending work that the Nazis would come to call “degenerate art.” In addition, Lucy was half Jewish, and they had communist affiliations in Paris, where they attended political rallies with Surrealists and socialized with artists like Gertrude Stein.

Paper Bullets is a compelling World War II story that has not been told before, about the galvanizing power of art, and of resistance.

Jeffrey H. Jackson is Professor of History at Rhodes College in Memphis, Tennessee. An expert on European history and culture, he is the author of Paris Under Water: How the City of Light Survived the Great Flood of 1910 and Making Jazz French: Music and Modern Life in Interwar Paris. He has appeared in documentary films and helped develop “Harlem in Montmartre: A Paris Jazz Story” for PBS’s Great Performances .

“Every page is gripping, and the amount of new research is nothing short of mindboggling. A brilliant book for the ages!”
—Douglas Brinkley, Rice University Professor and bestselling author of American Moonshot: John F. Kennedy and the Great Space Race

“This is a Nazi resistance story like none you’ve ever heard or read, a story with two unlikely heroines who risked their lives in their subversive—and often wildly creative—struggle to face down evil. Paper Bullets prompts us to explore the boundaries of art, love, gender, and politics—and to question the true meaning of courage.”
—Hampton Sides, bestselling author of In the Kingdom of Ice and On Desperate Ground

“Cataloguing everything from their small but fearless acts of resistance to their harrowing stints in prison cells, author Jeffrey H. Jackson had us utterly riveted. His well-researched history goes deep into the characters of these two unlikely heroes, whose rebellion was fueled by love and compassion. Malherbe and Schwob’s inspiring story is barely known, but Paper Bullets will make you want to shout it from the rooftops.”
—Apple Books (Best Book of November)

“A captivating tale of queer love and resistance during World War II . . . Jackson’s research is impeccable and his writing is lively . . . Paper Bullets is a gem of a historical text about two women who stood up to power defiantly, living on their own terms.”
—Foreword Reviews (starred review)

“The book, at once tense and tender, is a scrupulously researched account of [Cahun and Moore's] lives. It is the first biography to comprehensively weave together their lifelong romance, radical art and fearless political resistance during World War II . . . Yet, even with its piercing wartime depictions of rationing and hunger, intimidation and depravity, and nail-biting acts of resistance, Paper Bullets is at its core a story of devotion.”
—The Washington Post

“Jeffrey Jackson brings to light Lucy and Suzanne’s courage and savvy in this book that reads like a classic WWII spy thriller, but with a modern focus on how these two heroes took society’s default tendency to underestimate women’s power and agency, especially during wartime, and used it to undermine the Nazis. We marvel at how they hide in plain sight as they stealthily fight the very forces trying to exterminate who they really are. And not only do they outsmart their German foes, but they survive to tell about it.”
—Emily Yellin, author of Our Mothers’ War

“Paper Bullets has it all — it's a tale of romance in spite of the odds, a slice of art history, and an inspirational World War II story. It is, simply put, nearly impossible to put down.”
—Memphis Flyer

“Impeccably researched and meticulously sourced, Paper Bullets is a welcome and timely portrait of courage and creativity.”
—Bookpage

“Readers will delight in this unique and well-crafted story of wartime resistance.”
— Publishers Weekly

“Paper Bullets reads like a well-paced, nail-biting thriller. Jeffrey H Jackson leads us through a novel-like tale of intrigue, scandal and plucky war-time resistance . . . The power of art and the impact of political artists makes for a gripping rollercoaster ride that we thoroughly enjoyed.”
—Daily Art Magazine

“A gripping story. The lesbian couple Lucy Schwob and Suzanne Malherbe deployed their intellectual capacities and peacetime experience in dissembling their identities to challenge the German occupiers with artistic 'paper bullets.' The contest between the baffled Nazis and the crafty traitors animates this historical thriller.”
—Bonnie G. Smith, author of Women In World History

“A regular occurrence in queer history is erasure. This book allows the past to speak for itself. Jackson elevates and highlights these Nazi-fighters and avant-garde artists—better known today as Claude Cahun and Marcel Moore—and reminds us to use spiritual arms instead of firearms in the face of growing division and hate.”
—Tommy Kha, artist and winner of the 2019 Creative Review Photography Annual

“Riveting. Breaks new ground in our understanding of collaboration and resistance in Nazi-occupied Europe and the impact of women in wartime. A must-read for anyone interested in World War II, resistance, women's history, or the defense of democratic ideals during times of tyranny and oppression.”
—Michael D. Bess, Vanderbilt University Professor and author of Choices Under Fire

This feature require that you enable JavaScript in your browser.
END_OF_DOCUMENT_TOKEN_TO_BE_REPLACED

This feature require that you enable JavaScript in your browser.
END_OF_DOCUMENT_TOKEN_TO_BE_REPLACED

This feature require that you enable JavaScript in your browser.
END_OF_DOCUMENT_TOKEN_TO_BE_REPLACED