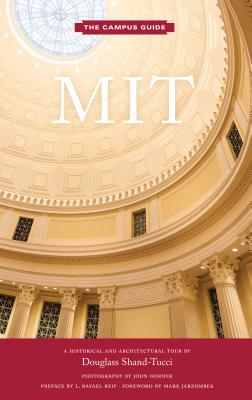 The Massachusetts Institute of Technology (MIT) was founded in 1861 as the cornerstone of Copley Square in Boston's Back Bay, then the center of a progressive, proto-globalist Brahmin culture committed to intellectual modernism and educational innovation. MIT founder William Barton Rogers's radical vision to teach by "mind and hand" was immediately successful.

In 1916 MIT, growing by leaps and bounds, moved its campus to the nearby Charles River Basin in Cambridge, where it now stretches along the shore overlooking the Back Bay. MIT: The Campus Guide presents the history of the Institute's founding and its two campuses. Today, the campus is studded with buildings designed by noted architects such as William Welles Bosworth, Alvar Aalto, Eero Saarinen, I. M. Pei, Steven Holl, Charles Correa, J. Meejin Yoon, Frank Gehry, and Fumihiko Maki, among others. Alongside the architecture is a distinguished array of public art including works by Picasso, Henry Moore, Alexander Calder, Louise Nevelson, Frank Stella, Sol LeWitt, and Jaume Plensa.

Historian and author Douglass Shand-Tucci, the Harvard-educated independent scholar, is founder of Back Bay Historical, dedicated to Boston-Centric Global Studies &pipe Art and Architecture; Literary, Cultural and Intellectual History. He is the author of many books, including Boston Bohemia, Built in Boston, The Art of Scandal, the Harvard University Campus Guide, and The Crimson Letter.

Douglass Shand-Tucci lives in Boston's Back Bay, where the learned flow is sometimes interrupted by provocative reviews and comment. He has taught at Harvard, where he was Senior Affiliate in the History of Architecture in Eliot House, and at MIT and is now on the faculty of the Boston Architectural College.

Mark Jarzombek is Professor of the History and Theory of Architecture at MIT. He is the author of Designing MIT:The Architecture of William Welles Bosworth.

"The reader who expects short descriptions and scripted walks in this architectural guide is in for a surprise: What Douglass Shand-Tucci has done is frame the history and architecture of the Massachusetts Institute of Technology as an apotheosis...?of the Boston Brahmin culture that undergirds its beginnings and persists in subtle ways to this day..[A]n informative and entertaining read." - Architecture Boston Magazine

This feature require that you enable JavaScript in your browser.
END_OF_DOCUMENT_TOKEN_TO_BE_REPLACED

This feature require that you enable JavaScript in your browser.
END_OF_DOCUMENT_TOKEN_TO_BE_REPLACED

This feature require that you enable JavaScript in your browser.
END_OF_DOCUMENT_TOKEN_TO_BE_REPLACED