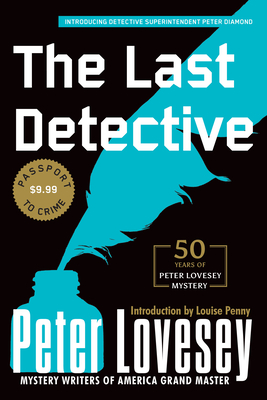 This is book number 1 in the A Detective Peter Diamond Mystery series.

"I am so excited for you to be at the very beginning of this trend-setting, beautifully written, vivid series."—from the introduction by LOUISE PENNY

In the first entry to the series and winner of the 1992 Anthony Boucher Award for Best Mystery Novel, Diamond must locate two missing letters attributed to Jane Austen to solve the murder of the "Lady in the Lake."

A woman’s body has been found floating in the weeds in a lake near Bath. There are no marks on her and no murder weapon. No one will identify her. It looks like Detective Superintendent Peter Diamond has his work cut out for him. Diamond is one of the last detectives of his kind, a gumshoe whose heroes solved crimes by question and answer, door stepping and deduction. To unravel this one, Diamond must locate two missing letters attributed to Jane Austen and defy his superiors in order to save a woman unjustly accused of murder.

Praise for The Last Detective

"A bravura performance . . . slyly paced, marbled with surprise and in the end, strangely affecting."
—The New York Times Book Review

"Not only a good story but a compelling one."
—Boston Globe

"Witty . . . One surprise after another."
—Publishers Weekly


Praise for The Peter Diamond series

This feature require that you enable JavaScript in your browser.
END_OF_DOCUMENT_TOKEN_TO_BE_REPLACED

This feature require that you enable JavaScript in your browser.
END_OF_DOCUMENT_TOKEN_TO_BE_REPLACED

This feature require that you enable JavaScript in your browser.
END_OF_DOCUMENT_TOKEN_TO_BE_REPLACED