Another One Goes Tonight (A Detective Peter Diamond Mystery #16) (Paperback) 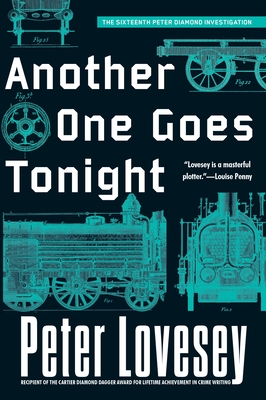 This is book number 16 in the A Detective Peter Diamond Mystery series.

"Another One Goes Tonight [is an] impeccably constructed mystery featuring the unpredictable but ever-entertaining Detective Superintendent Peter Diamond...there are plenty of red herrings to sniff out and misdirections to blindly follow. A classic whodunit."  —The New York Times Book Review

En route to investigate a late-night disturbance, a patrol car spins off the road, killing one of the cops and leaving the other in critical condition. Detective Peter Diamond is assigned to look into the case. His supervisor is desperately hoping Diamond will not discover the officers were at fault. Instead, he discovers something even worse—a civilian on a motorized tricycle was involved in the crash and has been lying on the side of the road for hours. Diamond administers CPR, but the man’s fate is unclear. Soon, though, Diamond becomes suspicious of the civilian victim and begins a private inquiry that leads to a trail of uninvestigated deaths. As the man lingers on life support, Diamond wrestles with the fact that he may have saved the life of a serial killer.

Praise for Another One Goes Tonight

"Another One Goes Tonight [is an] impeccably constructed mystery featuring the unpredictable but ever-entertaining Detective Superintendent Peter Diamond...there are plenty of red herrings to sniff out and misdirections to blindly follow. A classic whodunit."
—The New York Times Book Review

"Lovesey is a master of the intricately plotted murder mystery... Easily one of the best and most entertaining mysteries I've read in a long time."
—Mystery Scene

"The characters are colorful and engaging; the dialogue is witty; and Lovesey’s prose carries readers effortlessly along a fairly lengthy book. Plus, his puzzle-making skills are top-notch. Matching wits with Diamond makes for a pleasant night’s entertainment. But you’re unlikely to solve the mystery before he does. Lovesey is a master of the genre."
—Richmond Times-Dispatch

"Delightful...the brilliance of the slightly cantankerous and overweight detective superintendent still shines strong. Bringing the beautiful city of Bath and the political problems plaguing modern police departments vividly to life, Another One Goes Tonight is an irresistible entry in the Diamond series."
—Shelf Awareness

"Lovesey’s superior 16th whodunit featuring Det. Supt. Peter Diamond offers fair play fans a delightfully clever puzzle that toys with their expectations. Lovesey taunts readers with extracts from what appears to be a serial killer’s diary while building up to an ingenious final reveal that highlights his gift for misdirection."
—Publishers Weekly

"Another absorbing, resourceful English procedural from one of the best."
—Kirkus Reviews

"Lovesey delivers a page-turner complete with a likable protagonist whose encounters with authority bring humor to a whodunit with an amazing conclusion."
—Library Journal

"Lovesey lays out a classic British mystery here, full of lively twists. Put this one on the summer reading list for pure enjoyment."
—Kingdom Books

"Peter Lovesey is one of the brightest lights in police procedural novels and this one, his 16th in his Peter Diamond series, is one of his best."
—Acadiana Lifestyle Magazine

Praise for the Peter Diamond series

This feature require that you enable JavaScript in your browser.
END_OF_DOCUMENT_TOKEN_TO_BE_REPLACED

This feature require that you enable JavaScript in your browser.
END_OF_DOCUMENT_TOKEN_TO_BE_REPLACED

This feature require that you enable JavaScript in your browser.
END_OF_DOCUMENT_TOKEN_TO_BE_REPLACED