I Was the Cat (Hardcover) 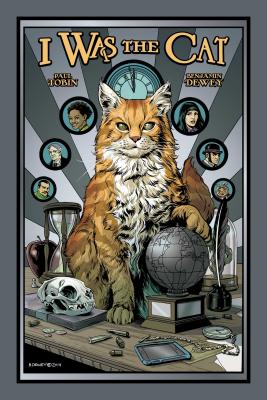 Allison Breaking is a talented journalist with her own blog and a lot of bills to pay. So when she receives an offer from a mysterious stranger named Burma to write his memoirs, it's an offer she can't refuse, not even with all the red flags popping up. But Burma is quite literally unlike any man Allison's ever known—because he's a cat! And this cat has stories to tell about how he (over the course of a few lifetimes) has shaped the world—and another, darker story that Allison must risk all to uncover... a story of what this particular cat has been doing with the LAST of his nine lives.

Paul Tobin is a New York Times-bestselling author. His writing includes Bandette, Colder, and many other comic books, graphic series and works of fiction. Bandette, drawn by Colleen Coover, was awarded the Eisner Award for Best Digital Series in 2013, and again in 2016. It was also a finalist for the Oregon Book Award for Graphic Literature in 2016. Paul’s graphic novel I Was the Cat, created with artist Benjamin Dewey, was nominated for an Eisner Award in 2015. The Genius Factor: How to Capture an Invisible Cat, first in Paul’s series of five novels for middle-grade readers, debuted in 2016 from Bloomsbury Kids. The second book in the series, How To Outsmart A Billion Robot Bees, released in March 2017.

This feature require that you enable JavaScript in your browser.
END_OF_DOCUMENT_TOKEN_TO_BE_REPLACED

This feature require that you enable JavaScript in your browser.
END_OF_DOCUMENT_TOKEN_TO_BE_REPLACED

This feature require that you enable JavaScript in your browser.
END_OF_DOCUMENT_TOKEN_TO_BE_REPLACED