Writing on the Wall: Social Media - The First 2,000 Years (Paperback) 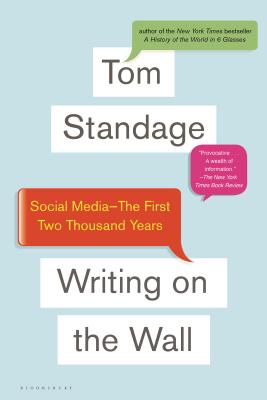 From the bestselling author of A History of the World in 6 Glasses, the story of social media from ancient Rome to the Arab Spring and beyond.

Social media is anything but a new phenomenon. From the papyrus letters that Cicero and other Roman statesmen used to exchange news, to the hand-printed tracts of the Reformation and the pamphlets that spread propaganda during the American and French revolutions, the ways people shared information with their peers in the past are echoed in the present.

Standage reminds us how historical social networks have much in common with modern social media. The Catholic Church's dilemmas in responding to Martin Luther's attacks are similar to those of today's large institutions in responding to criticism on the Internet, for example, and seventeenth-century complaints about the distractions of coffeehouses mirror modern concerns about social media. Invoking figures from Thomas Paine to Vinton Cerf, co-inventor of the Internet, Standage explores themes that have long been debated, from the tension between freedom of expression and censorship to social media's role in spurring innovation and fomenting revolution. Writing on the Wall draws on history to cast provocative new light on today's social media and encourages debate and discussion about how we'll communicate in the future.

Tom Standage is digital editor at the Economist and editor in chief of Economist.com. He is the author of six books, including the New York Times bestseller A History of the World in 6 Glasses and The Victorian Internet, described by the Wall Street Journal as a “dot-com cult classic.” Standage has written for numerous publications, including Wired, the New York Times, and the Guardian. He lives in London with his wife and children. Visit his website at www.tomstandage.com.

“Standage captures quite beautifully the essence of the human need to connect and interact, both its banality and world-altering power.” —Publishers Weekly

“A thoroughly fascinating look at the evolution of social media.” —Booklist, starred review

“Standage has just this one big point to make, but he makes it elegantly and instructively . . . what we tend to regard as the radiant novelty of the digital age may really be a rebirth.” —The Wall Street Journal

“Tom Standage once again displays his ingenious gift for connecting our historical past to the debates and technologies of the present day.” —Steven Johnson, author of Future Perfect and Where Good Ideas Come From

This feature require that you enable JavaScript in your browser.
END_OF_DOCUMENT_TOKEN_TO_BE_REPLACED

This feature require that you enable JavaScript in your browser.
END_OF_DOCUMENT_TOKEN_TO_BE_REPLACED

This feature require that you enable JavaScript in your browser.
END_OF_DOCUMENT_TOKEN_TO_BE_REPLACED