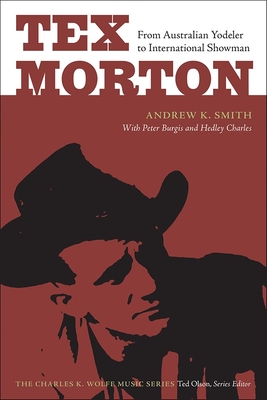 Born in 1916 at the northern end of New Zealand’s South Island, the teenaged Robert William Lane became obsessed with the singing and expressive yodeling of country music’s Jimmie Rodgers. By the 1940s, his obsession and subsequent focus on his own guitar playing, singing, and yodeling led him to achieve musical stardom as Tex Morton, master showman and influential progenitor of Australian country music. Tex Morton: From Australian Yodeler to International Showman offers the first full-length biography of this country music phenomenon from down under.

“From the time he first left the security of his home and set out to discover the world, life was a continual journey for Tex Morton,” Smith writes in chapter 1. And it was: Beginning with Morton’s early life and chronicling his burgeoning career and ultimate stardom, Smith’s study showcases Morton’s multi-faceted creative endeavors over the years, from showman and sharpshooter to hypnotist and academic. His talents took him all over the world, from Australia and New Zealand and countries throughout Asia to the United States, Canada, and England. Smith’s carefully constructed narrative captures the nuance of a versatile yet driven, flawed yet talented figure who ultimately became both an influential country artist and an entertainer of international standing over the course of an almost fifty-year career.

An important contribution to music history scholarship, this volume not only establishes Morton’s significance in the history of Australian country music, but it also draws deep connections between Morton’s Australasian influence and country music in the United States, exploring Morton’s legacy in the wider context of the genre worldwide. Complete with a comprehensive discography of Tex Morton’s works, Smith’s in-depth biography claims for Morton his rightful place as a major founding figure in the history of Australian country music.

ANDREW K. SMITH, now retired, was formerly a high-school math teacher, psychometrician and educational statistician, and director of large-scale literacy and numeracy assessment programs at both state and national levels. His articles have appeared in the Journal of Country Music and Old Time Country, and he has written liner notes for rereleases of Australian country artists, including Tex Morton.

This feature require that you enable JavaScript in your browser.
END_OF_DOCUMENT_TOKEN_TO_BE_REPLACED

This feature require that you enable JavaScript in your browser.
END_OF_DOCUMENT_TOKEN_TO_BE_REPLACED

This feature require that you enable JavaScript in your browser.
END_OF_DOCUMENT_TOKEN_TO_BE_REPLACED