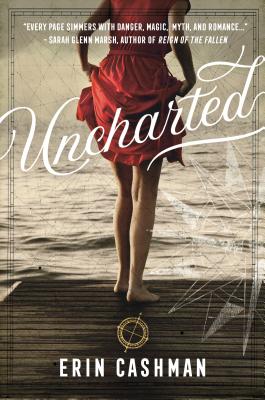 A secret worth dying for is also worth killing for.

Seventeen-year-old Annabeth prefers the fantasy of her books and paintings to reality—because in reality, her mom is dead, and it was all her fault. She vows to make her dad’s life easier in return. But upon accompanying him to his friends' secluded manor, he goes missing in the woods.

Annabeth suspects the manor’s heir Griffin knows more about the disappearance than he’s letting on. He’s irritable, removed, and he’s under police investigation for the mysterious “accidents” happening at his family’s estate.

Annabeth fears her father isn’t lost, but rather a victim of something sinister. She launches her own investigation, tracing clues that whisper of myth and legend and death, until she stumbles upon a secret. One that some would die to protect, others would kill to expose—and which twists Annabeth’s fantasy and reality together in deadly new ways.

Erin Cashman is a Young Adult author living in Massachusetts. Her debut YA fantasy, The Exceptionals (Holiday House) was named a Bank Street College of Education Best Children’s Book of 2013. She is also the workshop coordinator and a mentor at the 1st 5 Pages Writing Workshop through the blog Adventures in YA Publishing.

"A suspenseful page-turner that will keep teens up at night. Threads of Irish legends are interwoven through the narrative and encounters with mythical animals and faraway lands add another layer of complexity. . . The author's rich descriptions of mystical creatures and beautiful settings will enchant readers. . . A must-have where fantastical thrillers are popular." – School Library Journal

“A spellbinding tale that merges legend with history, and danger with longing. Uncharted is everything you could want in a story.” – Lisa Maxwell, New York Times bestselling author of The Last Magician

“Rich with mystery, Irish legends, and heart, Erin Cashman's Uncharted takes the reader on a haunting adventure that had me so intrigued I was flipping pages well into the night!” – Brenda Drake, New York Times bestselling author of Thief of Lies

“Prepare to be swept away! An ancient secret that many have died to protect. Richly detailed mythology. A hero who is — literally — like no other. This thrilling and romantic adventure deftly navigates the blurred lines between legend and reality. Safe to say, Erin Cashman’s Uncharted plotted a course straight to my heart!” – Pintip Dunn, New York Times bestselling author of Forget Tomorrow

“Journey through the fog into the atmospheric world of Uncharted, a stunning new fantasy where legend and reality come together in the form of a deadly mystery, where every page simmers with danger, magic, myth, and romance. Readers are sure to fall in love with this dark, gripping story that brings ancient Ireland to life on the misty shores of modern-day Maine.” – Sarah Glenn Marsh, author of Reign of the Fallen

“A perfect blend of thriller, mystery, romance, and contemporary, Uncharted features great characters, a marvelous setting, and a mythology so fabulous and complete that I couldn’t turn the pages fast enough!” – Martina Boone, award-winning author of the Heirs of Watson Island trilogy

“Erin Cashman is a master storyteller. [She] finds portals in the seemingly ordinary world and leads us into uncharted territories of mystery, magic, and Irish mythology. Uncharted is a page-turner and a refreshingly original tale!” – Diana Renn, award-winning author of Blue Voyage