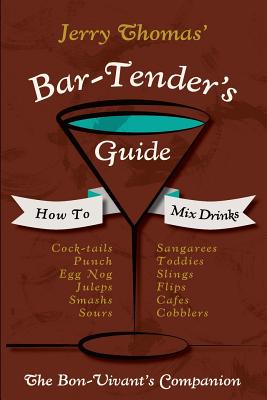 By Jerry Thomas, Ross Brown (Foreword by)
Email or call for price.

Dive into an opulent universe of punches, cobblers, toddies, slings, sours and a host of other classic old-world cocktails

Legendary bartender Jerry Thomas (1832-1885) whose name was once synonymous with quality in the world of high-end drink, compiled this seminal volume in 1862. In doing so, he codified the concoctions that have become the backbone of high-end bars around the world Often lauded as the father of mixology, Jerry Thomas, in addition to penning this book (the first drink book ever published in America), popularized inventive drinks and elevated the practice of bartending to an art form.

At the height of his popularity in the 19th Century, people all over the country were eager to taste Thomas' recipes. While serving as the principle bartender at the Occidental Hotel in San Francisco he earned more money per week than the Vice President of the United States Perhaps most famous for his signature cocktail, the Blue Blazer, which involves pouring flaming whiskey between two glasses to create a dramatic pyrotechnic display, Jerry Thomas laid the foundations for today's cocktail renaissance while Abraham Lincoln was still in the White House.

To this day, Thomas is celebrated as one of the most creative bartenders in history. With this trove of astounding cocktail recipes in your hand you'll never be short on inspiration behind the bar

This feature require that you enable JavaScript in your browser.
END_OF_DOCUMENT_TOKEN_TO_BE_REPLACED

This feature require that you enable JavaScript in your browser.
END_OF_DOCUMENT_TOKEN_TO_BE_REPLACED

This feature require that you enable JavaScript in your browser.
END_OF_DOCUMENT_TOKEN_TO_BE_REPLACED