This Wild Land: Two Decades of Adventure as a Park Ranger in the Shadow of Katahdin (Paperback) 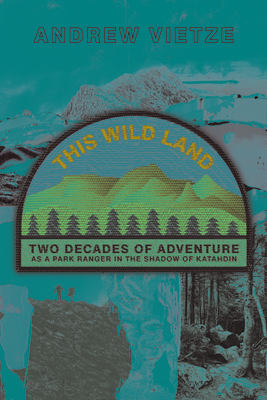 "An essential campsite read, Andrew Vietze's This Wild Land is a fascinating and intimate account of the triumphs and tribulations faced by a park ranger committed to protecting Maine's premier state park and the colorful characters who visit it."--Andrea Lankford, author of Ranger Confidential: Living, Working, and Dying in the National Parks Almost twenty years ago, Andrew Vietze made an unexpected career change: from punk rock magazine editor to park ranger at Baxter State Park in Maine. Home to Katahdin, the northern terminus of the Appalachian Trail, Baxter State Park sees some 60,000 visitors each summer alone, keeping the park rangers beyond busy. From midnight search-and-rescue missions to trail maintenance to cleaning toilets, Baxter rangers do it all... and, over the decades, Vietze has seen it all. As he grows from neophyte to old hand, the relationships that Vietze builds with his fellow rangers are illustrated as vibrantly as any attempt to save a lightning strike victim or raid on illegal campers. In This Wild Land, Vietze tells his story with humor, action, and an eye for the compelling details of life as a park ranger, making it the perfect read for outdoor and armchair adventurers alike. "Eighteen years ago, Andrew Vietze did something many people dream of but few of us have the guts to do; he left a prestigious office job to take an entry-level position working in the Maine North Woods. This Wild Land records his adventures and misadventures as a ranger at Baxter State Park: home to legendary Mount Katahdin, beloved by both Henry David Thoreau and Teddy Roosevelt, and arguably the last wild place in the Eastern US. Vietze's story is at once inspirational, frankly heartfelt, and endlessly entertaining. In other words, it has all the makings of a new Maine classic."--Paul Doiron, author of The Poacher's Son and Dead by Dawn "When young people ask for advice about becoming a writer, my response is generally as follows: write (and read) all the time. And get a real job. Usually, I recommend plumbing, because it's lucrative and also because there are always good stories to be found in kitchens and bathrooms...Having read Vietze's fine storytelling, I think I might recommend his path instead. Beginning as a magazine writer, Vietze found a real, and really wonderful, job, patrolling and protecting Baxter State Park. One of the most beautiful places on earth, Baxter also boasts Mount Katahdin, the highest mountain in Maine and the northern terminus of the Appalachian Trail. The work of a Baxter ranger is varied, challenging and sometimes life-saving...and has provided Andrew Vietze with an abundance of good stories. He offers these with humor, verve, an eye for the telling detail and an infectious delight in this rugged corner of the natural world, and its human and non-human inhabitants."--Kate Braestrup, New York Times bestselling author of Here if You Need Me.

Andrew Vietze is a writer and Baxter State Park ranger. He has written more than a dozen books, including Essential Guide to Winter Recreation, Boon Island: A True Story of Mutiny, Shipwreck, and Cannibalism (winner of the 2013 Independent Publisher Book Award), and Becoming Teddy Roosevelt: How a Maine Guide Inspired America's 26th President. For the past two decades, he's spent six months a year as a ranger in the wilds of the Katahdin region. The rest of the year he resides in Appleton, ME.

This feature require that you enable JavaScript in your browser.
END_OF_DOCUMENT_TOKEN_TO_BE_REPLACED

This feature require that you enable JavaScript in your browser.
END_OF_DOCUMENT_TOKEN_TO_BE_REPLACED

This feature require that you enable JavaScript in your browser.
END_OF_DOCUMENT_TOKEN_TO_BE_REPLACED