The Battle of Barrosa: Forgotten Battle of the Peninsular War (Hardcover) 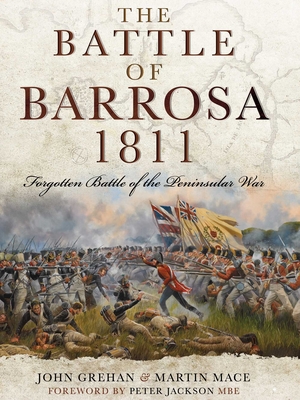 By the winter of 1810–11, the armies of Napoleon had overrun most of Spain, and Joseph Bonaparte sat on the throne in Madrid. But the Spanish government had found refuge in the fortress-port of Cadiz, and the Spaniards refused to admit that they had been conquered. With a British army under Sir Thomas Graham helping to defend Cadiz, the Spanish cause seemed certain to prevail.

The opposing forces met on the heights of Barrosa in one of the most savage encounters of the Peninsular War. At stake were the very survival of the Spanish nation and the future course of the war against Napoleon.

The Battle of Barrosa is the first book to examine this crucial campaign in detail and to reveal its true historical importance.

Skyhorse Publishing, as well as our Arcade imprint, are proud to publish a broad range of books for readers interested in history--books about World War II, the Third Reich, Hitler and his henchmen, the JFK assassination, conspiracies, the American Civil War, the American Revolution, gladiators, Vikings, ancient Rome, medieval times, the old West, and much more. While not every title we publish becomes a New York Times bestseller or a national bestseller, we are committed to books on subjects that are sometimes overlooked and to authors whose work might not otherwise find a home.

John Grehan has written or contributed to more than sixty books, magazines, and journals covering a large span of military history from the Iron Age to the present war in Afghanistan. He lives in the United Kingdom.

Martin Mace has been involved in writing and publishing military history for more than twenty years. He established Historic Military Press, which has published a wide range of titles. In 2006 he began working on the idea for Britain at War magazine, the first issue of which went on sale in May 2007. This publication has grown rapidly to become the bestselling military history periodical on the high street, and also sells in countries around the world. He lives in West Sussex, England.

This feature require that you enable JavaScript in your browser.
END_OF_DOCUMENT_TOKEN_TO_BE_REPLACED

This feature require that you enable JavaScript in your browser.
END_OF_DOCUMENT_TOKEN_TO_BE_REPLACED

This feature require that you enable JavaScript in your browser.
END_OF_DOCUMENT_TOKEN_TO_BE_REPLACED