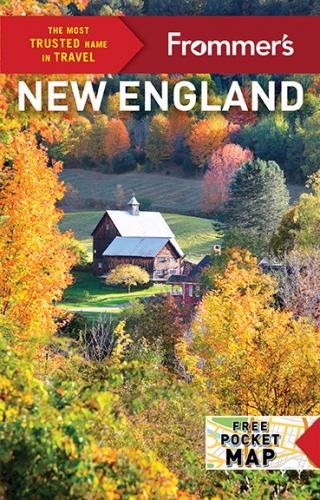 Frommer's comprehensive guide to New England fans across this quintessentially American region to show readers how to explore quaint villages, historic sites dating to the country's earliest days, and bustling cities. In this region nature decked out in four seasons of finery, from ravishing autumn leaves and wintry ski slopes to glittering lakes and seashores in summer. And with Frommer's, you can count on the sort of honest talk and useful insider tips that have been the brand's hallmark for more than 60 years. Whether your budget is large or small, Frommer's equips you with everything you need to discover New England like a local.

*Strategic itineraries, including for families and weeklong stays, so you can make the most of your time

*Candid reviews of the best restaurants, attractions, tours, shops, and experiences--and advice on the ones not worth your time and money

*Budget-planning help with the lowdown on prices and ways to save money, whether you're traveling on a shoestring or in the lap of luxury

About Frommer's: There's a reason that Frommer's has been the most trusted name in travel for more than sixty years. Arthur Frommer created the best-selling guide series in 1957 to help American servicemen fulfill their dreams of travel in Europe, and since then, we have published thousands of titles became a household name helping millions upon millions of people realize their own dreams of seeing our planet. Travel is easy with Frommers.

Kim Knox Beckius is a Connecticut-based writer and photographer whose passion for New England inspires everything she does, whether it's riding a giant inflatable lobster in her wedding gown, naming her daughter so she shares initials with L.L. Bean or sending free fall leaves in the mail to autumn lovers around the world. She's the author of six books on Northeast travel, including New England's Historic Homes & Gardens, and has been the voice of New England travel for About.com since 1998. She is a full time contributor to Yankee Magazine. She lives in the Hartford area. Leslie Brokaw has been a travel writer for over a decade, contributing to more than a dozen Frommer's Guides to Montreal and New England. Her first books were coauthored with her stepfather, long-time Frommer's contributor, Herbert Livesey. She teaches at Emerson College. She resides in Watertown, MA. Brian Kevin is the managing editor of Down East magazine and has written for Outside, Travel + Leisure, Men's Journal, Audubon and a number of other magazines. His work has been recognized or anthologized in Best Food Writing, Best American Essays and Best American Sports Writing and he's the author of The Footloose American: Following the Hunter S. Thompson Trail Across South America. He lives in Damariscotta, Maine. Herbert Bailey Livesey has written about food and travel for over 40 years, authoring or contributing to Frommer's Montreal & Quebec City, Frommer's Europe, and Frommer's New England. In addition, he wrote and revised five guidebooks in the earlier American Express series, which were translated into eleven languages. Scores of his articles have been published in Travel + Leisure, Food & Wine, Playboy, New York, and Yankee. Laura Reckford has been exploring and writing about Cape Cod, Martha's Vineyard and Nantucket, as well as other parts of New England, for more than 20 years. She is the founder and CEO of Cape Cod Wave, an online magazine covering the culture and character of Cape Cod. She is also the news director for Cape Cod Broadcasting, which runs four radio stations on Cape Cod. She resides in Falmouth, MA. Barbara Radcliffe Rogers is a travel writer and guidebook author specializing in Europe and eastern United States and Canada. She is co-author of seven guidebooks to Italy, three to Spain and several others covering European cities, Atlantic Canada and New England. She writes regularly for Global Traveler Magazine, where she has also served as News Editor, and for several other magazines, newspapers and websites. Her taste for travel began when she moved to Verona, Italy, soon after completing her degree at Boston University, and she has since traveled to every country in Western Europe, and much of Eastern Europe and Latin America. Barbara currently lives in New Hampshire, and spends a good part of each year in Europe. Wherever she is, she's likely to be skiing in the winter and kayaking in the summer and discovering new flavors for her blog, Worldbite. Award-winning travel writer Bill Scheller is a 30-year Vermont resident. His books include America: A History in Art; Colonial New England on Five Shillings a Day; and, with his wife Kay, Best Vermont Drives. Among his more than 300 published articles are numerous features in Yankee magazine on his adopted state. He lives in Randolph, Vermont. Erin Trahan is a Boston-based writer and editor who specializes in film and travel. She teaches at Emerson College. She has written extensively for Frommer's Travel Guides. Erin lives in Marblehead, MA.

This feature require that you enable JavaScript in your browser.
END_OF_DOCUMENT_TOKEN_TO_BE_REPLACED

This feature require that you enable JavaScript in your browser.
END_OF_DOCUMENT_TOKEN_TO_BE_REPLACED

This feature require that you enable JavaScript in your browser.
END_OF_DOCUMENT_TOKEN_TO_BE_REPLACED