If These Walls Could Talk: Boston Red Sox (Paperback) 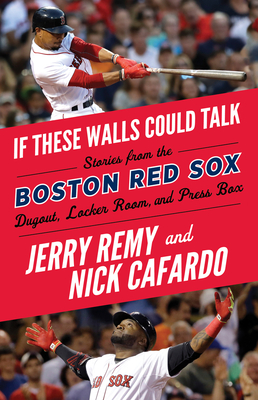 By Jerry Remy, Nick Cafardo, Sean McDonough (Foreword by)
$17.95
On Our Shelves Now

The Boston Red Sox are one of the most iconic teams in Major League Baseball, with nine World Series championships and countless greats who have donned the Sox uniform. In If These Walls Could Talk: Boston Red Sox, former player and longtime broadcaster Jerry Remy provides insight into the team's inner sanctum as only he can. Readers will gain the perspective of players, coaches, and personnel in moments of greatness as well as defeat, making for a keepsake no fan will want to miss.

A former second baseman for the Angels and Red Sox, Jerry Remy has served as NESN's color commentator on Red Sox broadcasts since 1988. He is a four-time New England Emmy Award winner and was named Massachusetts Sportscaster of the Year by the National Sportscasters and Sportswriters Association in 2004. He is the author of Watching Baseball: Discovering the Game Within the Game and Red Sox Heroes: The RemDawg's All-Time Favorite Red Sox, Great Moments, And Top Teams. He has also written five books in the Hello, Wally! series for children. Nick Cafardo was a national baseball writer for the Boston Globe as well as a correspondent for NESN and MLB Network. He was chosen by Boston Magazine as Boston's Best Sportswriter in 1994. Previous books include 100 Things Red Sox Fans Should Know & Do Before They Die, The Impossible Team: The Worst to First Patriots' Super Bowl Season, and Inside Pitch: Playing and Broadcasting the Game I Love with Tom Glavine. Sean McDonough was the television play-by-play announcer for the Boston Red Sox from 1988 to 2004, during which time he was honored four times with the New England Sports Emmy Award for Outstanding Play-by-Play. He is now a leading play-by-play commentator for ESPN college football and basketball games in addition to calling the annual Par 3 Contest at The Masters. Most recently the voice of Monday Night Football, McDonough has covered the World Series, NCAA Final Four, the Olympic Games, and all four major golf championships, among other marquee events during his accomplished career.

This feature require that you enable JavaScript in your browser.
END_OF_DOCUMENT_TOKEN_TO_BE_REPLACED

This feature require that you enable JavaScript in your browser.
END_OF_DOCUMENT_TOKEN_TO_BE_REPLACED

This feature require that you enable JavaScript in your browser.
END_OF_DOCUMENT_TOKEN_TO_BE_REPLACED