Her Majesty's Top Gun: and the Decline of the Royal Navy (Paperback) 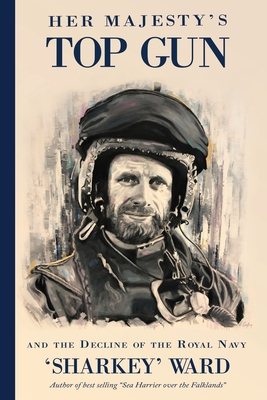 This book relates the part played by Royal Navy Top Guns in defence of UK's global National Interests since World War II. It is an intimate account of the author's "technicolour" journey to Top Gun status, the fighter pilot lite of Britain's armed forces, and provides insight into the real world behind the blockbuster movie.

It is about the attitude and making of a war-fighter.

Instructively, it then goes on to provide the unfortunate history of the recent decline of the UK's Naval Service revealing misleading propaganda and untruths that have been used to fraudulently influence Ministers and the UK Government.

The two stories are interlinked through personal experience of

Major-General Julian Thompson CB OBE, Royal Marines: "Painstaking preparation of his Squadron, superlative personal flying skills, and a determination to engage the enemy more closely, made Sharkey Ward a fighter leader in the mould of Bader, Johnson, Ball, and others in the past".
Admiral Sir Sandy Woodward, Carrier Battle Group Commander: "If Sharkey Ward had not disobeyed orders, we could not have won the Falklands War". A Royal Navy Top Gun and Air Warfare Instructor, Sharkey was Senior Pilot of 892 Phantom F4-K Squadron in the aircraft carrier HMS Ark Royal during the Cold War. He personally introduced the Sea Harrier Fighter Aircraft to Naval Service, commanding the Intensive Flying Trials Unit 700A Squadron, 899 Headquarters Squadron and then 801 Front Line Squadron in the Falklands where he was Senior Sea Harrier advisor to the Command on all aspects of the fast jet air war. He flew over sixty war missions by day and night, achieved three air-to-air kills (& one damaged) and was involved in or witnessed eight further kills.

This feature require that you enable JavaScript in your browser.
END_OF_DOCUMENT_TOKEN_TO_BE_REPLACED

This feature require that you enable JavaScript in your browser.
END_OF_DOCUMENT_TOKEN_TO_BE_REPLACED

This feature require that you enable JavaScript in your browser.
END_OF_DOCUMENT_TOKEN_TO_BE_REPLACED