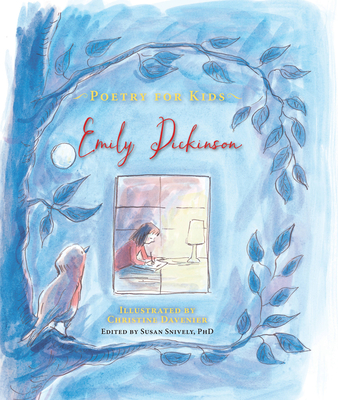 As the premier title in the Poetry for Kids series, Emily Dickinson introduces children to the works of poet Emily Dickinson. Poet, professor, and scholar Susan Snively has carefully chosen 35 poems of interest to children and their families. Each poem is beautifully illustrated by Christine Davenier and thoroughly explained by an expert. The gentle introduction, which is divided into sections by season of the year, includes commentary, definitions of important words, and a foreword.

Emily Dickinson was an American poet whose writing was heavily influenced by the Metaphysical poets of seventeenth-century England, as well as her reading of the Book of Revelation and her upbringing in a Puritan New England town. In addition to poetry, Dickinson had a passion for baking and botany, and became reclusive later in life. While Dickinson was extremely prolific as a poet and regularly enclosed poems in letters to friends, she was not publicly recognized during her lifetime. The first volume of these works was published in 1890, well after her death in 1886. A full compilation, The Poems of Emily Dickinson, wasn’t published until 1955, though previous iterations had been released. Dickinson has since been regarded as one of the most important figures in American poetry.

Susan Snively, PhD, is the author of four books of poetry: From This Distance (Alice James, 1981), Voices in the House (Alabama Poetry Series, 1988), The Undertow (University of Central Florida, 1998), and Skeptic Traveler (David Robert Books, 2005). She has taught at Smith College, Mount Holyoke College, and Amherst College and has received fellowships from the NEA and the Massachusetts Artists Foundation. For 27 years, she directed the Writing Center at Amherst College and is the Associate Dean of Students. She earned her BA from Smith College and her MA and PhD from Boston University.

Dr. Snively has given readings and lectures at the Salem Athenaeum, Marlboro College, University of Louisville, Wesleyan University, the Bread Loaf Writers Conference, the Monadnock Lyceum Lecture series in Peterborough, NH, and elsewhere. A guide at the Emily Dickinson Museum, Snively wrote and narrated the films "Seeing New Englandly," and "My Business is to Sing," produced by Ernest Urvater, in the series "Angles of a Landscape." She regularly leads discussions on various aspects of Dickinson for the museum's monthly poetry group. Her first novel, The Heart Has Many Doors, about Dickinson's love affair with Judge Otis Phillips Lord, was published in February 2015, by White River Press. She lives in Amherst with her husband, Peter Czap.

"This arresting edition makes for a wonderful introduction to Dickinson's poetry that's sure to captivate all ages." - Kirkus Reviews (starred)

"I’m already a HUGE Emily Dickinson fan so the poems, to me, are wonderful. But, what sets this book apart are the whimsical illustrations. They bring the poems to life! Especially for children." - Melissa Taylor, Imagination Soup

"It’s a solidly good book in a promising new series – and one I was happy to stumble upon this week, as Dickinson is so much balm for one’s soul." - Julie Danielson, kirkusreviews.com

This feature require that you enable JavaScript in your browser.
END_OF_DOCUMENT_TOKEN_TO_BE_REPLACED

This feature require that you enable JavaScript in your browser.
END_OF_DOCUMENT_TOKEN_TO_BE_REPLACED

This feature require that you enable JavaScript in your browser.
END_OF_DOCUMENT_TOKEN_TO_BE_REPLACED