We Are the Change We Seek: The Speeches of Barack Obama (Hardcover) 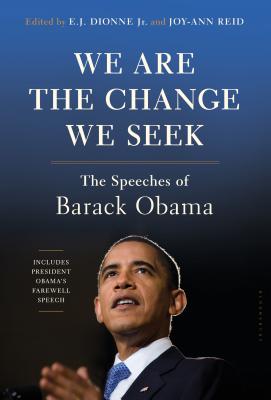 "It is a political partisan's dream to see them [Obama's words] so finely gathered here." -Washington Post

We Are the Change We Seek is a collection of Barack Obama's 27 greatest addresses: beginning with his 2002 speech opposing the Iraq War and closing with his emotional farewell address in Chicago in January 2017. As president, Obama’s words had the power to move the country, and often the world, as few presidents before him. Whether acting as Commander in Chief or Consoler in Chief, Obama adopted a unique rhetorical style that could simultaneously speak to the national mood and change the course of public events. Obama’s eloquence, both written and spoken, propelled him to national prominence and ultimately made it possible for the son of a Kenyan man and a white woman from Kansas to become the first black president of the United States.

These speeches span Obama’s career--from his time in state government through to the end of his tenure as president--and the issues most important to our time: war, inequality, race relations, gun violence and human rights. The book opens with an essay placing Obama’s oratorical contributions within the flow of American history by E.J. Dionne Jr., columnist and author of Why The Right Went Wrong, and Joy Reid, the host of AM Joy on MSNBC and author of Fracture.

Packaged handsomely with deckled page edges, We Are the Change We Seek is an important and special addition to every bookshelf.

E.J. Dionne, Jr. writes about politics in a twice-weekly column and on the PostPartisan blog. He is also a government professor at Georgetown University, a visiting professor at Harvard University, a senior fellow in governance studies at the Brookings Institution and a frequent commentator on politics for National Public Radio and MSNBC. He is the author of seven books including One Nation After Trump: A Guide for the Perplexed, The Disillusioned, The Desperate, and The Not-Yet Deported (co-authored with Norman J. Ornstein and Thomas E. Mann) and Why the Right Went Wrong: Conservatism – From Goldwater to the Tea Party and Beyond. He lives in Bethesda, Md., with his wife, Mary Boyle. They have three children, James, Julia and Margot.

Joy-Ann Reid is a political analyst, the host of "AM Joy”, the author of the book Fracture: Barack Obama, the Clintons and the Racial Divide, and a columnist at The Daily Beast. Joy writes a weekly column for The Daily Beast and her columns and articles have appeared in The New York Times, The New Republic, and The Guardian. She and her husband, editor Jason Reid, own a documentary film company called Image Lab Media Group. She currently resides in Brooklyn with her husband and family. Follow her on Twitter, Snapchat and Instragram at @JoyAnnReid and "like" her on Facebook at Joy Reid Official

"In a new book, 'We Are the Change We Seek: The Speeches of Barack Obama,' we have been given the first partial, though still substantive, look at Obama’s words, and it is a political partisan's dream to see them so finely gathered here." - Washington Post

"Here is a greatest hits package of Barack Obama’s speeches . . . A thoughtfully chosen selection . . . The introduction is excellent . . . Lordy, we’re going to miss him." — The Guardian

"Together, the speeches selected in We Are the Change We Seek lay out a vision of an open, pluralistic, just, and confident America. It is a vision that seems distant today. ‘But,’ as Obama might say, ‘in the unlikely story that is America, there has never been anything false about hope.’" — Australian Book Review

This feature require that you enable JavaScript in your browser.
END_OF_DOCUMENT_TOKEN_TO_BE_REPLACED

This feature require that you enable JavaScript in your browser.
END_OF_DOCUMENT_TOKEN_TO_BE_REPLACED

This feature require that you enable JavaScript in your browser.
END_OF_DOCUMENT_TOKEN_TO_BE_REPLACED