Behind the Enigma: The Authorized History of GCHQ, Britain’s Secret Cyber-Intelligence Agency (Hardcover) 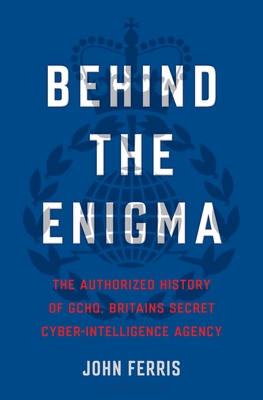 The definitive history of GCHQ, one of the world’s most tight-lipped intelligence agencies, written with unprecedented access to classified archives.

For a hundred years GCHQ – Government Communications Headquarters – has been at the forefront of British secret statecraft. Born out of the need to support military operations in the First World War, and fought over ever since, today it is the UK's biggest intelligence, security and cyber agency and a powerful tool of the British state.

Famed primarily for its codebreaking achievements at Bletchley Park against Enigma ciphers in the Second World War, GCHQ has intercepted, interpreted and disrupted the information networks of Britain's foes for a century, and yet it remains the least known and understood of British intelligence services.

It has been one of the most open-minded, too: GCHQ has always demanded a diversity of intellectual firepower, finding it in places which strike us as ground-breaking today, and allying it to the efforts of ordinary men and women to achieve extraordinary insights in war, diplomacy and peace. GCHQ shapes British decision-making more than any other intelligence organisation and, along with its partners in the Five Eyes intelligence partnership-including the United States' National Security Agency-has become ever more crucial in an age governed by information technology.

Based on unprecedented access to documents in GCHQ's archive, many of them hitherto classified, this is the first book to authoritatively explain the entire history of one of the world's most potent intelligence agencies. Many major contemporary conflicts-between Russia and the West, between Arab nations and Israel, between state security and terrorism-become fully explicable only in the light of the secret intelligence record. Written by one of the world's leading experts in intelligence and strategy, Behind the Enigma reveals the fascinating truth behind this most remarkable and enigmatic of organisations.

John Ferris is a professor of history at the University of Calgary, where he is also a fellow at the Centre for Military and Strategic Studies. He received a PhD in war studies from King's College London. He is the author of numerous academic articles on diplomatic intelligence and military history, as well as on contemporary strategy and intelligence. He lives in Calgary, Canada.

“Remarkable. . . Ferris’s account avoids sensationalism. It provides a careful judgment of Bletchley Park’s impact, points to how signals intelligence during the Cold War usefully illuminated the lower levels of the Soviet system, and shows GCHQ’s operational importance to the conduct of colonial and postcolonial conflicts, including the 1982 Falklands War.” - Foreign Affairs

“Fascinating . . . [Ferris] has rescued several great women codebreakers from obscurity . . . This monumental work completes the authorised picture of a century of British intelligence, a testament to how far Britain has moved away from the cult of official secrecy.” - The Times

“A fascinating tale [that] takes us with the codebreakers – mathematicians, linguists, teachers and philosophers and eccentrics – through the ages of radio, telegrams telephone and satellites to the digital present.” - Financial Times

“GCHQ emerges from the shadows . . . The story of the codebreakers is in fact a parallel history of the entire twentieth century . . . There is intriguing detailing of the organisation’s structure and systems . . . Illuminating . . . Absorbing.” - Spectator

“A book of revelation . . . Although he spent months sifting the papers in a high-security Cheltenham vault, [Ferris] does not lose sight of the big picture . . . Today, [Ferris] argues, greater openness about intelligence gathering does not affect its relevance and power. His book is an example of this, and shows that the abandonment of Cold War levels of secrecy about GCHQ benefits us all.” - Sunday Times

“A global tale of mathematics, engineering, data sciences and linguistics in the service of politics, diplomacy, war and security.” - Nature

“In Ferris we have a shrewd and scrupulous historian . . . GCHQ shows it is alert to the role of a security and defence agency in a modern democracy, and Ferris is to be congratulated for shedding so much light upon it.” - Scotsman

“The book is at its best when sifting the role of signal intelligence (Sigint) in the Falklands war and other late imperial conflicts such as Indonesia and Palestine . . . Comprehensive.” - The Guardian

“Ferris offers sharp judgments of the successes and failures of British communications intelligence and its personnel.” - The Michigan War Studies Review

This feature require that you enable JavaScript in your browser.
END_OF_DOCUMENT_TOKEN_TO_BE_REPLACED

This feature require that you enable JavaScript in your browser.
END_OF_DOCUMENT_TOKEN_TO_BE_REPLACED

This feature require that you enable JavaScript in your browser.
END_OF_DOCUMENT_TOKEN_TO_BE_REPLACED