7 Seconds to Die: A Military Analysis of the Second Nagorno-Karabakh War and the Future of Warfighting (Paperback) 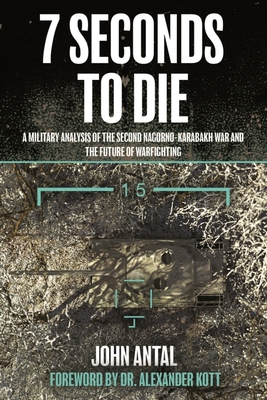 The Second Nagorno-Karabakh war--fought between Armenia and Azerbaijan between September 24 and November 10, 2020--was the first war in history won primarily by unmanned systems.

This 44-day war resulted in a decisive military victory for Azerbaijan. Armenia was outfought, outnumbered, and outspent and lost even though they controlled the high ground in a mountainous region that favored traditional defense. Azerbaijan's alliance with Turkey, and close technological support from Israel, strategically isolated Armenia. In addition, Turkey's posturing influenced the Russians not to intervene to support Armenia. That Azerbaijan attacked Armenia during the pandemic was an additional factor. The fact that Azerbaijan won the war is not extraordinary, considering the correlation of forces arrayed against Armenia. What is exceptional is that this was the first modern war primarily decided by unmanned weapons. In this war the Turkish-made BAYRAKTAR TB2 Unmanned Air Combat Vehicle (UCAV) and the Israeli-made HAROP Loitering Munition (LM) dominated the fighting and provided Azerbaijan with a war-winning advantage.

This feature require that you enable JavaScript in your browser.
END_OF_DOCUMENT_TOKEN_TO_BE_REPLACED

This feature require that you enable JavaScript in your browser.
END_OF_DOCUMENT_TOKEN_TO_BE_REPLACED

This feature require that you enable JavaScript in your browser.
END_OF_DOCUMENT_TOKEN_TO_BE_REPLACED