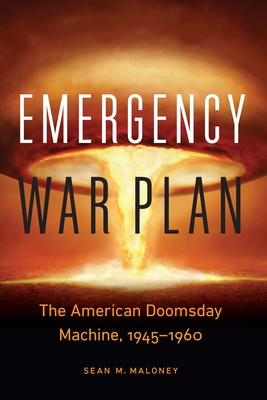 Emergency War Plan examines the theory and practice of American nuclear deterrence and its evolution during the Cold War. Previous examinations of nuclear strategy during this time have, for the most part, categorized American efforts as “massive retaliation” and “mutually assured destruction,” blunt instruments to be casually dismissed in favor of more flexible approaches or summed up in inflammatory and judgmental terms like “MAD.” These descriptors evolved into slogans, and any nuanced discussion of the efficacy of the actual strategies withered due to a variety of political and social factors.

Drawing on newly released weapons effects information along with new information about Soviet capabilities as well as risky and covert espionage missions, Emergency War Plan provides a completely new examination of American nuclear deterrence strategy during the first fifteen years of the Cold War, the first such study since the 1980s. Ultimately what emerges is a picture of a gargantuan and potentially devastating enterprise that was understood at the time by the public in only the vaguest terms but that was not as out of control as has been alleged and was more nuanced than previously understood.

Sean M. Maloney is a professor of history at the Royal Military College of Canada and served as the Canadian Army’s historian for the war in Afghanistan from 2003 to 2014. He is the author of several books, including Learning to Love the Bomb: Canada’s Nuclear Weapons during the Cold War (Potomac Books, 2007) and Deconstructing Dr. Strangelove: The Secret History of Nuclear War Films (Potomac Books, 2020).

"Emergency War Plan is an important and much-needed book. . . . The author has done yeoman service with the book, and it deserves a place on the scholar's shelf next to Richard Rhodes's outstanding works on the development of nuclear weapons."—John M. Curatola, Journal of Military History

“This is an outstanding book. Sean Maloney has written an extremely detailed, prodigiously researched, and highly readable account of the U.S. nuclear war plans of the 1950s. . . . [Maloney] offers the term ‘massive deterrence’ to describe the effect of these [nuclear] forces, their demonstrated ability to deliver their weapons on target, and the iron will of American leaders to respond to a Soviet or Chinese attack if necessary. Deterrence worked. This is a definitive work on a complicated and arcane subject.”—Phillip S. Meilinger, former dean of the School of Advanced Airpower Studies at Air University

“[This] is the Rosetta Stone compendium and most comprehensive body of work I have ever read on the development of the United States’ nuclear war plan. In exacting detail this book unravels the mystery behind the planning and operations of America’s nascent nuclear capability during the early years of the Cold War.”—Lt. Gen. Jack Weinstein, USAF (Ret.), former commander of the Twentieth Air Force and former deputy chief of staff for strategic deterrence and nuclear integration at the Pentagon

“It might seem quaint today, but that distant ‘air atomic age’ of Truman and Eisenhower’s day planted and sprouted the seeds of the nuclear reign of terror. Sean Maloney renders an exhaustive account of how atomic penury morphed into nuclear plenty, and how war plans—including British offensive and Soviet defensive ones—changed in response. Along the way, Emergency War Plan presents a fresh picture of bombs, bombers, and groups matched to prospective targets, in a much more sophisticated fashion than in our received history of ‘massive retaliation.’ This book helps us understand Cold War history in a new way.”—John Prados, author of The Soviet Estimate

This feature require that you enable JavaScript in your browser.
END_OF_DOCUMENT_TOKEN_TO_BE_REPLACED

This feature require that you enable JavaScript in your browser.
END_OF_DOCUMENT_TOKEN_TO_BE_REPLACED

This feature require that you enable JavaScript in your browser.
END_OF_DOCUMENT_TOKEN_TO_BE_REPLACED