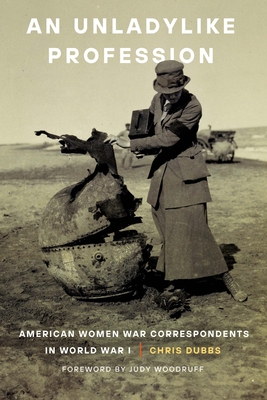 When World War I began, war reporting was a thoroughly masculine bastion of journalism. But that did not stop dozens of women reporters from stepping into the breach, defying gender norms and official restrictions to establish roles for themselves—and to write new kinds of narratives about women and war.

Chris Dubbs tells the fascinating stories of Edith Wharton, Nellie Bly, and more than thirty other American women who worked as war reporters. As Dubbs shows, stories by these journalists brought in women from the periphery of war and made them active participants—fully engaged and equally heroic, if bearing different burdens and making different sacrifices. Women journalists traveled from belligerent capitals to the front lines to report on the conflict. But their experiences also brought them into contact with social transformations, political unrest, labor conditions, campaigns for women’s rights, and the rise of revolutionary socialism.

An eye-opening look at women’s war reporting, An Unladylike Profession is a portrait of a sisterhood from the guns of August to the corridors of Versailles.

Chris Dubbs is a military historian living in Edinboro, Pennsylvania, and has worked as a newspaper journalist, editor, and publisher. He is the author of numerous books, including American Journalists in the Great War: Rewriting the Rules of Reporting (Nebraska, 2017) and America’s U-Boats: Terror Trophies of World War I (Nebraska, 2014).

Judy Woodruff is the anchor and managing editor of the PBS NewsHour and is a founding co-chair of the International Women’s Media Foundation. She is the author of “This is Judy Woodruff at the White House.”

"This slice of World War I history offers insights into American journalism as well as into the terrible conflict itself. . . . [Dubbs] writes with a sure hand, drawing from published articles, memoirs, diaries and letters. He skillfully presents each woman’s story in a linked series of riveting—sometimes heart-breaking—narratives. . . . Near the end of An Unladylike Profession, Mr. Dubbs remarks on the reporter’s duty to report the truth no matter how uncomfortable it might be. The journalists profiled in this absorbing book lived up to that responsibility."—Melanie Kirkpatrick, Wall Street Journal
— Melanie Kirkpatrick

"Readers will be inspired by the nearly unimaginable obstacles these journalists overcame to perform their jobs with flair. A welcome history suitable for World War I aficionados and budding journalists."—Kirkus Reviews, starred
— Kirkus Reviews

"Chris Dubbs’s An Unladylike Profession jumps into the trenches with the women reporters of World War I—groundbreaking journalists who explained the war to readers in the US, and who shared stories from the war’s brutal aftermath."—Foreword Reviews
— Foreword Reviews

"Dubbs . . . delivers a rousing narrative of adventurous women, passionate about their careers, who broke free from oppressive gender norms to accomplish their goals. Hand this book to World War I aficionados and casual history buffs."—Michelle Ross, Booklist
— Michelle Ross

"An Unladylike Profession is an excellent read not only for those interested in women as war correspondents, but because of how those journalists brought unique perspectives to the reporting of the war."—Strategy Page

“Dubbs tells his story with an unerring eye for unforgettable anecdotes and dramatic situations, nicely balanced by careful attention to historical background. He is a master at distilling complex historical information into readable and intelligent works for an audience of academics and non-academics alike.”—Steven Trout, author of On the Battlefield of Memory: The First World War and American Remembrance, 1919–1941
— Steven Trout

“This superbly written book brings to life the achievements and personalities of almost three dozen women who challenged conventions and sometimes risked their lives to report on the First World War. Each woman’s story is unique, and all of them are compelling.”—Edward G. Lengel, author of Never in Finer Company: The Men of the Great War’s Lost Battalion
— Edward G. Lengel

“With a host of wonderful stories, Dubbs shakes the dust of history off these women, restoring them to their rightful place in the history of World War I journalism. Delightful and illuminating.”—John-Daniel Kelley, coeditor of The AEF in Print: An Anthology of American Journalism in World War I
— John-Daniel Kelley

This feature require that you enable JavaScript in your browser.
END_OF_DOCUMENT_TOKEN_TO_BE_REPLACED

This feature require that you enable JavaScript in your browser.
END_OF_DOCUMENT_TOKEN_TO_BE_REPLACED

This feature require that you enable JavaScript in your browser.
END_OF_DOCUMENT_TOKEN_TO_BE_REPLACED