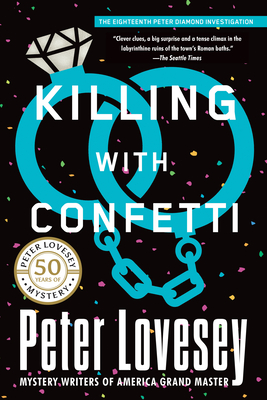 This is book number 18 in the A Detective Peter Diamond Mystery series.

As a New Year begins in Bath, Ben Brace proposes to his long-term girlfriend, Caroline, the daughter of notorious crime baron Joe Irving, who is coming to the end of a prison sentence. The problem is that Ben’s father, George, is the Deputy Chief Constable. A more uncomfortable set of in-laws would be hard to imagine. But mothers and sons are a formidable force: a wedding in the Abbey and reception in the Roman Baths are arranged before the career-obsessed DCC can step in.

Peter Diamond, Bath’s head of CID, is appalled to be put in charge of security on the day. Ordered to be discreet, he packs a gun and a guest list in his best suit and must somehow cope with potential killers, gang rivals, warring parents, bossy photographers and straying bridesmaids. The laid-back Joe Irving seems oblivious to the danger he is in from rival gang leaders, while Brace can’t wait for the day to end. Will the photo session be a literal shoot? Will Joe Irving’s speech as father of the bride be his last words? Can Diamond pull off a miracle, avert a tragedy and send the happy couple on their honeymoon?

Praise for Killing with Confetti

“Mr. Lovesey has been writing his Peter Diamond series for nearly three decades, and it’s a pleasure to note no discernible flagging of energy in author or detective. And how refreshing to hear the inimitable Diamond erupt in righteous ‘F— forensics. . . . We’re detectives. . . . We investigate.’”
—The Wall Street Journal

“Lovesey plant[s] clever clues, a big surprise and a tense climax in the labyrinthine ruins of the town’s Roman baths.”
—The Seattle Times

“The pacing of this novel is unusual . . . But as fans might expect, there is a reason for everything, and Lovesey has several surprises up his sleeve.”
—Ellery Queen Mystery Magazine

“Lovesey connects the dots plausibly and, as always, lightens the mood with dry wit.”
—Publishers Weekly

“Lovesey's series is rich with history of the scenic area of Bath, England, and laced with wit, danger, pathos, love and loss. His protagonist, Peter Diamond, is a fully rounded human being with his own unique crime-solving methods . . . Killing with Confetti begins more lightheartedly than Lovesey’s previous mysteries, as entertaining as its title. So kick back and enjoy a delightful summer escape from the drumbeat of real-world events that pays off with a surprising, page-turning denouement.”
—BookReporter

“The crafting is superb . . . Killing with Confetti is book eighteen in Lovesey’s Peter Diamond mystery series, and it has yet to let readers down. It delivers the same satisfaction as all of its predecessors.”
—New York Journal of Books

“There’s plenty of suspense amid the festivities and Lovesey’s skillful plotting keeps readers on their toes. Add a fair sprinkling of Lovesey’s wit which makes the novel a must-read for fans.”
—Zoom Street

“If you have a friend who's still stuck in "old-fashioned" British crime fiction like Agatha Christie's books, here's a great opportunity to lure the reader into the modern century without losing the very British flavor.”
—Kingdom Books

“Killing With Confetti is vintage Lovesey . . . The story grabbed me from the start, but once I got close to the end, those twists and turns kept coming, and I was delighted.”
—Kittling Books

“An engrossing story of a failed prison riot, a rather sweet account of the relationship between the prospective bride and groom, and finally, a detailed and absorbing description of an assassin readying for the murderous deed.”
—Reviewing the Evidence

“I absolutely loved Peter Diamond. He's a no nonsense policeman and Lovesey is a no nonsense writer. I felt like I was watching an episode of a British crime series and enjoyed every minute of it.”
—Mystery Playground

“Lovesey creates the unexpected. There is certainly nothing ordinary or predictable about the way the story begins or continues forward . . . An excellent traditional police procedural.”
—It Is Purely My Opinion

“Witty, stylish and a bit of a rogue—that’s what people said about Richard Nash [and] the same might be said of Peter Lovesey, whose elegant mysteries pay tribute to the past glories of this beautiful city.”
—The New York Times Book Review

“Peter Lovesey—the dean of English mystery novelists—remains as ingenious as ever.”
—The Washington Post

“If you like real history turned into crime clues, this is your book . . . This is a great puzzle plot that will keep you guessing. Just what Lovesey does best.”
—The Globe & Mail

This feature require that you enable JavaScript in your browser.
END_OF_DOCUMENT_TOKEN_TO_BE_REPLACED

This feature require that you enable JavaScript in your browser.
END_OF_DOCUMENT_TOKEN_TO_BE_REPLACED

This feature require that you enable JavaScript in your browser.
END_OF_DOCUMENT_TOKEN_TO_BE_REPLACED