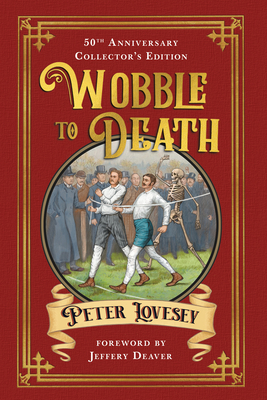 This is book number 1 in the A Sergeant Cribb Investigation series.

London, 1879. Crowds have gathered at Islington's chilly Agricultural Hall to place their bets on who will become the next world champion in a six-day, 500-mile speedwalking race, the “wobble.” When one of the highly favored contenders dies under suspicious circumstances, Sergeant Cribb also has a race on his hands—to pursue a ruthless murderer.

Fifty years ago, Wobble to Death launched the writing career of one of the world’s greatest crime fiction writers. Since its initial publication, Peter Lovesey has written forty novels and six short story collections, and has become one of three living writers to receive both the Mystery Writers of America Grand Master Award and the Crime Writers Association Diamond Dagger for Lifetime Achievement. There is no better place to dive into Lovesey's legendary oeuvre than with this sparkling debut.

Praise for Wobble to Death

“Some countries are rich in diamonds. Others drill for oil and come up a gusher. In the United Kingdom, its cash crop is great mystery writers, to say the least. Maybe it’s the beer? Or the fog? One more delightful example is this Victorian-set mystery by Lovesey . . . Bursting with period detail, Wobble to Death was an immediate hit in 1970. Who can resist a murder set at a speedwalking (or “wobbling”) competition in London circa 1879? Not us, surely. And once you’ve fallen for Lovesey, you’ll have the ongoing contemporary mystery series starring “the last detective” Peter Diamond to savor as well. Wobble to your nearest bookstore or library!”
—Parade Magazine

“[Wobble to Death] celebrates its 50th anniversary this year with a gilt-trimmed collector’s edition . . . The Mystery Writers of America named this book one of the 100 best mysteries of all time; half a century later, the magic holds up.”
—Tom Nolan, The Wall Street Journal

“A fine case of murder projected against a compelling historical background.”
—The New York Times

“Don’t miss this for an outstanding period piece with plummy characters and a killer neatly hidden. It will be on all the best lists.”
—Los Angeles Times, Dorothy B. Hughes

“Nobody ever invented it once again better than that.”
—James Crumley, author of The Last Good Kiss

"A delightful mystery about murder at a six-day foot race in the Royal Agricultural Hall in Islington, north London, with his series protagonists Detective Sergeant Cribb and his assistant Constable Thackeray on the case. As someone who creates plot twists for a living, I was sure I’d nailed the baddie. Nope. I got it completely wrong. Hence, the admiring guffaw."
—Jeffrey Deaver

"Lovesey masterfully contrasts the stiff social rules of the Victorian era with the chaotic, free-for-all spectacle of the footrace."
—Adam Woog, The Seattle Times

“First prize-winner, and a worthy one. The book’s primary fascination lies in the period detail—which is excellently done—and the sheer oddity of it all.”
—Sunday Times, Edmund Crispin

“A mystery story about which one might well ask, ‘They poison wobblers, don’t they?’ . . . Even if that notion was not too much for any reader to resist, Lovesey would ensnare him with such trappings as a splendid fog-shrouded chase in a hansom over the cobbled streets of London . . . Best of all, even as the murders are done, the suspects plod plausibly on . . . The result is a good read, as they say.”
—Sports Illustrated

“The details of the race are informative; the two murders committed at the event are fictitious and quite shocking.”
—Pittsburgh Press

“A gem of a murder mystery.”
—Houston Chronicle

“The set-up of Wobble to Death is so splendid that many a judge would have given the prize on this alone without more ado.”
—Times Literary Supplement

“There is a refreshing originality about Wobble to Death . . . One is inevitably reminded of that near-classic of the dance-marathons, They Shoot Horses, Don’t They? but there is sufficient originality here to let the book stand squarely on its own . . . There is a haunting quality about the book which fixes it in the memory.”
—The Guardian

“Every detail chimes bell-true with every other and none is stuffed in for detail’s sake. Add a simple but effective mystery and what more could you ask?”
—The Times, H.R.F. Keating

“Prizewinner of a £1000 first crime novel competition and a really worthy one. A brilliant reconstruction.”
—The Observer

“A strikingly well-written whodunit in the classic pattern.”
—The Sun

“As good as they come.”
—Morning Star

“Brilliantly evocative of the sporting London of 1879 and fascinating in its description of one of the six-day pedestrian contests—'wobbles’—of the period. It is long since I came across so original a setting for a novel of mystery.”
—The Spectator

"Peter Lovesey is one of the world’s best crime novelists, and one of the best historians of running . . . Full of surprises, vivid running details, and human interest."
—PodiumRunner Magazine

"This is a must-read for lovers of British crime, and of well-plotted, entertaining mysteries in general . . . The release date is perfect also for holiday shopping—get two copies, because you won't want to give yours away."
—Kingdom Books

This feature require that you enable JavaScript in your browser.
END_OF_DOCUMENT_TOKEN_TO_BE_REPLACED

This feature require that you enable JavaScript in your browser.
END_OF_DOCUMENT_TOKEN_TO_BE_REPLACED

This feature require that you enable JavaScript in your browser.
END_OF_DOCUMENT_TOKEN_TO_BE_REPLACED