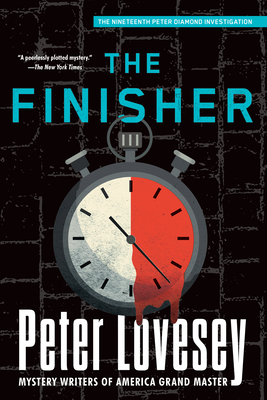 This is book number 19 in the A Detective Peter Diamond Mystery series.

On the 50th anniversary of the publication of his first novel, Peter Lovesey, Mystery Writers of America Grand Master and titan of the British detective novel, returns to the subject of his very first mystery—running.

Through a particularly ill-fated series of events, couch potato Maeve Kelly, an elementary school teacher whose mother always assured her “curvy” girls shouldn’t waste their time trying to be fit, has been forced to sign up for the Other Half, Bath’s springtime half marathon. The training is brutal, but she must disprove her mother and collect pledges for her aunt’s beloved charity. What Maeve doesn’t know is just how vicious some of the other runners are.

Meanwhile, Detective Peter Diamond is tasked with crowd control on the raucous day of the race—and catches sight of a violent criminal he put away a decade ago, and who very much seems to be up to his old tricks now that he is paroled. Diamond’s hackles are already up when he learns that one of the runners never crossed the finish line and disappeared without a trace. Was Diamond a spectator to murder?

Peter Lovesey is the author of forty highly praised mystery novels. He has been named a Grand Master by the Mystery Writers of America and has been awarded the CWA Gold and Silver Daggers, the Cartier Diamond Dagger for Lifetime Achievement, the Strand Magazine Award for Lifetime Achievement, the Macavity, Barry, and Anthony Awards, and many other honors. He lives in Shrewsbury, England.

Praise for The Finisher

"Lovesey is careful to remind us that Bath holds hidden secrets behind its gracious Georgian architecture . . . Light and dark imagery is a fixture of Lovesey’s Bath novels, in which life is lived on many levels, some in full sunshine and others buried in shadow."
—The New York Times Book Review

"[Lovesey] has created a brisk, colorful page-turner centered on murder and mayhem at the springtime half-marathon in the city of Bath."
—The Pittsburgh Post-Gazette

“I was convinced this go-round—I’ve read all of the Diamond series—that I’d spotted the killer and took notes to that end. But with Lovesey’s masterful craftiness, I was dead wrong. This fine mystery finishes strong and is a sheer demonic delight.”
—The Providence Journal

"Peter Lovesey's storytelling skills, and certainly his gift for constructing a fair play puzzle, match those of the finest exponents of Golden Age fiction."
—Martin Edwards

"Masterly, atmospheric . . . On the 50th anniversary of the publication of his first novel, Lovesey is still going strong."
—Publishers Weekly, Starred Review

"Peter Lovesey is one of the world’s best crime novelists, and one of the best historians of running . . . Full of surprises, vivid running details, and human interest."
—PodiumRunner Magazine

"Lovesey has stayed enviably fresh throughout his decades-long mystery-writing marathon and once again breaks the tape in fine form."
—Air Mail

Praise for Killing with Confetti

“Mr. Lovesey has been writing his Peter Diamond series for nearly three decades, and it’s a pleasure to note no discernible flagging of energy in author or detective. And how refreshing to hear the inimitable Diamond erupt in righteous ‘F— forensics. . . . We’re detectives. . . . We investigate.’”
—The Wall Street Journal

“Lovesey plant[s] clever clues, a big surprise and a tense climax in the labyrinthine ruins of the town’s Roman baths.”
—The Seattle Times

“Rich with history of the scenic area of Bath, England, and laced with wit, danger, pathos, love and loss . . . A delightful summer escape from the drumbeat of real-world events.”
—BookReporter

This feature require that you enable JavaScript in your browser.
END_OF_DOCUMENT_TOKEN_TO_BE_REPLACED

This feature require that you enable JavaScript in your browser.
END_OF_DOCUMENT_TOKEN_TO_BE_REPLACED

This feature require that you enable JavaScript in your browser.
END_OF_DOCUMENT_TOKEN_TO_BE_REPLACED