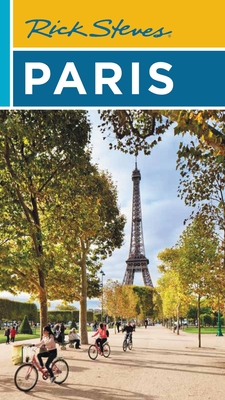 Since 1973, Rick Steves has spent about four months a year exploring Europe. His mission: to empower Americans to have European trips that are fun, affordable, and culturally broadening. Rick produces a best-selling guidebook series, a public television series, and a public radio show, and organizes small-group tours that take over 30,000 travelers to Europe annually. He does all of this with the help of more than 100 well-traveled staff members at Rick Steves' Europe in Edmonds, WA (near Seattle). When not on the road, Rick is active in his church and with advocacy groups focused on economic and social justice, drug policy reform, and ending hunger. To recharge, Rick plays piano, relaxes at his family cabin in the Cascade Mountains, and spends time with his son Andy and daughter Jackie. Find out more about Rick at www.ricksteves.com and on Facebook.

Steve Smith has had one foot in France and one in the United States for 55 years. He drives a Deux Chevaux car and has restored a farmhouse on the Burgundy canal where he hangs his beret in the spring and summer. Steve managed tour guides for Rick Steves’ Europe for more than two decades but now spends his time researching guidebooks, teaching about France, and exploring every corner of his favorite country. When not in France, Steve loves finding dirt grown backstreets in his VW camper van.

Gene Openshaw has co-authored a dozen Rick Steves books, specializing in writing walks and tours of Europe's cities, museums, and cultural sites. He also writes for Rick's public television series, produces audio tours on Europe, and is a regular guest on Rick's public radio show. Outside of the travel world, Gene has co-authored The Seattle Joke Book. As a composer, Gene has written a full-length opera called Matter, a violin sonata, and dozens of songs. He lives near Seattle, where he enjoys giving presentations on art and history, and roots for the Mariners in good times and bad.

"The country's foremost expert in European travel for Americans."—Forbes

"Steves is an absolute master at unlocking the hidden gems of the world's greatest cities, towns, and monuments."—USA Today

“Every country-specific travel guidebook from the Rick Steves publishing empire can be counted upon for clear organization, specificity and timeliness."—Society of American Travel Writers

"Pick the best accommodations and restaurants from Rick Steves…and a traveler searching for good values will seldom go wrong or be blindsided."—NBC News

"His guidebooks are approachable, silly, and even subtly provocative in their insistence that Americans show respect for the people and places they are visiting and not the other way around." —The New Yorker

"Travel, to Steves, is not some frivolous luxury—it is an engine for improving humankind, for connecting people and removing their prejudices, for knocking distant cultures together to make unlikely sparks of joy and insight. Given that millions of people have encountered the work of Steves over the last 40 years, on TV or online or in his guidebooks, and that they have carried those lessons to untold other millions of people, it is fair to say that his life’s work has had a real effect on the collective life of our planet."—The New York Times Magazine

"[Rick Steves] laces his guides with short and vivid histories and a scholar's appreciation for Renaissance art yet knows the best place to start an early tapas crawl in Madrid if you have kids. His clear, hand-drawn maps are Pentagon-worthy; his hints about how to go directly to the best stuff at the Uffizi, avoid the crowds at Versailles and save money everywhere are guilt-free."—TIME Magazine

"Steves is a walking, talking European encyclopedia who yearns to inspire Americans to venture 'beyond Orlando.'"—Forbes

"His books offer the equivalent of a bus tour without the bus, with boiled-down itineraries and step-by-step instructions on where to go and how to get there, but adding a dash of humor and an element of choice that his travelers find empowering."—The New York Times

"His penchant for creating meaningful experiences for travelers to Europe is as passionate as his inclination for making ethical choices his guiding light."—Forbes

"[Rick Steves'] neighborhood walks are always fun and informative. His museum guides, complete with commentary about historic sculpture and storied artworks are wonderful and add another dimension to sometimes stodgy, hard-to-comprehend museums."—NBC News

This feature require that you enable JavaScript in your browser.
END_OF_DOCUMENT_TOKEN_TO_BE_REPLACED

This feature require that you enable JavaScript in your browser.
END_OF_DOCUMENT_TOKEN_TO_BE_REPLACED

This feature require that you enable JavaScript in your browser.
END_OF_DOCUMENT_TOKEN_TO_BE_REPLACED