Collateral Damage: The Mysterious Deaths of Marilyn Monroe and Dorothy Kilgallen, and the Ties that Bind Them to Robert Kennedy and the JFK Assassination (Hardcover) 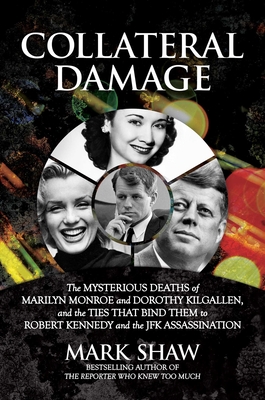 If there had been no cover-up of Robert Kennedy’s complicity in the murder of Marilyn Monroe in 1962 and he had been prosecuted based on compelling evidence at the time, the assassination of JFK by Bobby’s enemies would not have happened—changing the course of history and preventing the murder of media icon Dorothy Kilgallen.

In a breakthrough book that is sure to be relevant for years to come, bestselling author (The Reporter Who Knew Too Much) and distinguished historian Mark Shaw investigates the connection between the mysterious deaths of motion picture screen siren Marilyn Monroe, President John F. Kennedy, and What’s My Line? TV star and crack investigative reporter Dorothy Kilgallen. A former noted criminal defense attorney and network legal analyst, Shaw provides an illuminating perspective as to how Robert Kennedy’s abuse of power during the early 1960s resulted in the murders of Marilyn, JFK, and Dorothy.

Praise for Mark Shaw Books
The Reporter Who Knew Too Much

“The compelling story of Dorothy Kilgallen, the celebrated journalist once called ‘the most powerful female voice in America.’” —Nick Pileggi, author of Wiseguy and Casino

“A worthy sequel to the mysterious whodunit that snuffed out the brave reporter, Denial of Justice is a true crime thriller that seeks to undo the label attached to Ms. Kilgallen’s untimely demise. Mark Shaw has done an admirable and exemplary job in his work. Do not miss!” —San Francisco Book Review

A former noted criminal defense attorney and USA Today, ABC, and ESPN legal analyst for the Mike Tyson, O. J. Simpson, and Kobe Bryant cases, bestselling author Mark Shaw has published nearly thirty books. In late 2020, he was honored when his alma mater, Purdue University, became the archival repository for his body of work alongside the collections of Amelia Earhart and Neil Armstrong. More about Mark, married to Wen-ying Lu, may be learned at www.markshawbooks.com.

This feature require that you enable JavaScript in your browser.
END_OF_DOCUMENT_TOKEN_TO_BE_REPLACED

This feature require that you enable JavaScript in your browser.
END_OF_DOCUMENT_TOKEN_TO_BE_REPLACED

This feature require that you enable JavaScript in your browser.
END_OF_DOCUMENT_TOKEN_TO_BE_REPLACED