Empire: A New History of the World (Hardcover) 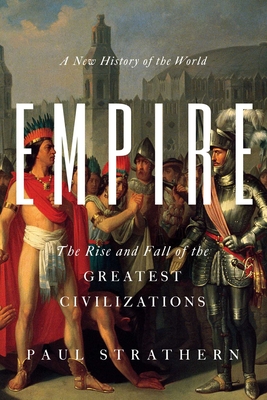 A dazzling new history of the world told through the ten major empires of human civilization.

Eminent historian Paul Strathern opens the story of Empire with the Akkadian civilization, which ruled over a vast expanse of the region of ancient Mesopotamia, then turns to the immense Roman Empire, where we trace back our Western and Eastern roots.

Next the narrative describes how a great deal of Western Classical culture was developed in the Abbasid and Umayyad Caliphates. Then, while Europe was beginning to emerge from a period of cultural stagnation, it almost fell to a whirlwind invasion from the East, at which point we meet the Emperors of the Mongol Empire . . .

Combining breathtaking scope with masterful narrative control, Paul Strathern traces these connections across four millennia and sheds new light on these major civilizations—from the Mongol Empire and the Yuan Dynasty to the Aztec and Ottoman, through to the most recent and biggest empires: the British, Russo-Soviet, and American.

Charting five thousand years of global history in ten lucid chapters, Empire makes comprehensive and inspiring reading to anyone fascinated by the history of the world.

Paul Strathern is a Somerset Maugham Award-winning novelist, and his nonfiction works include The Venetians, Death in Florence, The Medici, Mendeleyev's Dream, and The Borgias, all available from Pegasus Books. He lives in England.

"The prolific author continues to do what he does best—bring history to wondrous life—with this thorough history of the Medici family. A fantastically comprehensive history covering the breadth of the great learning, art, politics, and religion of the period."
— Kirkus Reviews (starred) [Praise for The Medici]

"Rich in incident and character, this engrossing narrative offers impressive portraits of dynastic figures who usher in a new era aflame with individualistic ambition. Lineal history pulsing with epoch-making energy."
— Booklist [Praise for The Medici]

"In this absorbing follow-up to his beautiful Death in Florence, Strathern chronicles the legendarily farsighted banking family, offering a cautionary tale. This gratifying and comprehensive family saga sheds light on both the internal workings of a remarkable family and on how a singular family irrevocably influenced Western civilization."
— Publishers Weekly [Praise for The Medici]

This feature require that you enable JavaScript in your browser.
END_OF_DOCUMENT_TOKEN_TO_BE_REPLACED

This feature require that you enable JavaScript in your browser.
END_OF_DOCUMENT_TOKEN_TO_BE_REPLACED

This feature require that you enable JavaScript in your browser.
END_OF_DOCUMENT_TOKEN_TO_BE_REPLACED