Royal Witches: Witchcraft and the Nobility in Fifteenth-Century England (Hardcover) 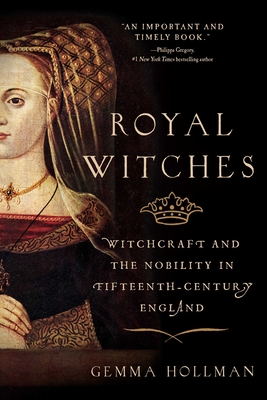 The stories of four royal women, their lives intertwined by family and bound by persecution, unravel the history of witchcraft in fifteenth-century England.

Until the mass hysteria of the seventeenth century, accusations of witchcraft in England were rare. However, four royal women, related in family and in court ties—Joan of Navarre, Eleanor Cobham, Jacquetta of Luxembourg and Elizabeth Woodville—were accused of practicing witchcraft in order to kill or influence the king.

Some of these women may have turned to the “dark arts” in order to divine the future or obtain healing potions, but the purpose of the accusations was purely political. Despite their status, these women were vulnerable because of their gender, as the men around them moved them like pawns for political gains.

In Royal Witches, Gemma Hollman explores the lives and the cases of these so-called witches, placing them in the historical context of fifteenth-century England, a setting rife with political upheaval and war. In a time when the line between science and magic was blurred, these trials offer a tantalizing insight into how malicious magic would be used and would later cause such mass hysteria in centuries to come.

Gemma Hollman has a Master’s degree in Medieval History from the University of York. She runs the Just History Posts blog and Twitter account and has written for the British Numismatic Journal. She lives in Hertfordshire, England.

“Hollman, who has a master’s degree in medieval history, provides an in-depth account of each woman’s rise to power and then chronicles the events of the time. A meticulous historical analysis.”
— Kirkus Reviews

"The way Hollman deftly untangles royal lineages and courtly machinations to bring sky to the stories of these women makes me want to accuse her of witchcraft. Well done."
— J.W. Ocker, Edgar Award-winning author of A Season with the Witch

"Some of history's most overlooked witches finally have their day in a smart expose boiling over with intriguing women."
— Susan Fair, author of American Witches

"An important and timely book looking at royal women who faced envy and political attack in the guise of accusations of witchcraft."
— Philippa Gregory, #1 New York Times bestselling author

"This introduces new readers, in the most accessible and colorful way, to a group of royal women who certainly deserve more public notice than they have hitherto received."
— Professor Ronald Hutton, author of 'The Witch: A History of Fear, from Ancient Times to the Present'

“Even readers familiar with the basic history of the Wars of the Roses will see aristocratic skulduggery in a strikingly fresh way in Royal Witches, as we continue to grapple with the treatment of women who rise to important positions even in our own time.”
— BookPage

This feature require that you enable JavaScript in your browser.
END_OF_DOCUMENT_TOKEN_TO_BE_REPLACED

This feature require that you enable JavaScript in your browser.
END_OF_DOCUMENT_TOKEN_TO_BE_REPLACED

This feature require that you enable JavaScript in your browser.
END_OF_DOCUMENT_TOKEN_TO_BE_REPLACED