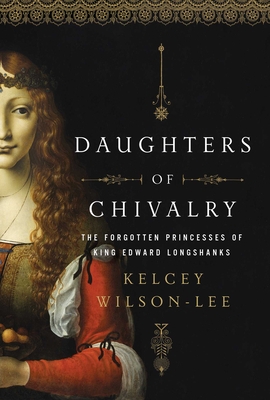 Revealing the truth behind the life of a royal princess in medieval England, the colorful story of the five remarkable daughters of King Edward I.

Virginal, chaste, humble, patiently waiting for rescue by brave knights and handsome princes: this idealized—and largely mythical—notion of the medieval noblewoman still lingers. Yet the reality was very different, as Kelcey Wilson-Lee shows in this vibrant account of the five daughters of Edward I, often known as Longshanks.

The lives of these sisters—Eleanora, Joanna, Margaret, Mary and Elizabeth—ran the gamut of experiences open to royal women in the Middle Ages. Edward’s daughters were of course expected to cement alliances and secure lands and territory by making great dynastic marriages, or endow religious houses with royal favor. But they also skillfully managed enormous households, navigated choppy diplomatic waters, and promoted their family’s cause throughout Europe—and had the courage to defy their royal father. They might never wear the crown in their own right, but they were utterly confident of their crucial role in the spectacle of medieval kingship.

Drawing on a wide range of contemporary sources, Daughters of Chivalry offers a rich portrait of these formidable women, seeing them—at long last—shine from out of the shadows, revealing what it was to be a princess in the Age of Chivalry.

Kelcey Wilson-Lee is a historian of Britain, its art, and its architecture. She writes for English Heritage and Country Life magazine. Kelcey manages the Regional Philanthropy program at the University of Cambridge, where she lives. Daughters of Chivalry is her first book.

"An appealing debut. Wilson-Lee’s in-depth narrative on these overlooked women, perfect for Anglophiles, adds new context to the much-studied courts of Edwards I and II."
— Publishers Weekly

"Like the women she describes, Wilson-Lee never loses sight of the fact that what power these women enjoyed was derived from their relationship to the king, but she fully explores the nature of that power and how they used it. A lively account of how luxury, power, and politics shaped the lives of five princesses in 13th-century England."
— Shelf Awareness

"Daughters of Chivalry is a kind of case study in medieval statecraft and family relations and, along the way, a portrait of life at court. It traces the fate of the five daughters of Edward I, one of the greatest of England’s medieval kings—know as “Longshanks” for his height. We can probably take it as given that whatever there is to be known about Edward’s daughters—“the forgotten princesses of King Edward Longshanks,” as the subtitle has it—is to be found here. The book will also serve as a rich quarry for romantic novelists. An engaging and enjoyable book."
— The Wall Street Journal

"Using a vast number of resources, the author draws back the stereotypes to highlight the daughters as individuals. While putting a spotlight on an underrepresented era of medieval history, this book seeks to appeal to all kinds of readers with its easy narrative style, in-depth research, and engrossing details."
— Library Journal (starred)

This feature require that you enable JavaScript in your browser.
END_OF_DOCUMENT_TOKEN_TO_BE_REPLACED

This feature require that you enable JavaScript in your browser.
END_OF_DOCUMENT_TOKEN_TO_BE_REPLACED

This feature require that you enable JavaScript in your browser.
END_OF_DOCUMENT_TOKEN_TO_BE_REPLACED