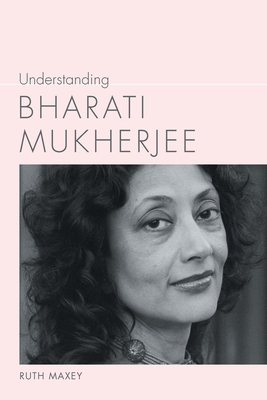 Bharati Mukherjee was the first major South Asian American writer and the first naturalized American citizen to win the National Book Critics Circle Award. Born in Kolkata, India, she immigrated to the United States in 1961 and went on to publish eight novels, two short story collections, two long works of nonfiction, and numerous essays, book reviews, and newspaper articles. She was professor emerita in the Department of English at the University of California, Berkeley, until her death in 2017.

In Understanding Bharati Mukherjee, Ruth Maxey discusses Mukherjee's influence on younger South Asian American women writers, such as Jhumpa Lahiri and Chitra Divakaruni. Mukherjee's powerful writing also enjoyed popular appeal, with some novels achieving best-seller status and international acclaim; her 1989 novel Jasmine was translated into multiple languages. One of the earliest writers to feature South Asian Americans in literary form, Mukherjee reflected upon the influence of non-European immigrants to the United States, following passage of the Immigration and Nationality Act of 1965, which abolished the quota system. Her vision of a globalized, interconnected world has been regarded as prophetic, and when Mukherjee died, diverse North American writers--Margaret Atwood, Joyce Carol Oates, Russell Banks, Michael Ondaatje, Ann Beattie, Amy Tan, and Richard Ford--came forward to praise her work and its importance.

Understanding Bharati Mukherjee is the first book to examine this pioneering author's complete oeuvre and to identify its legacy. Maxey offers new insights into widely discussed texts and recuperates overlooked works, such as Mukherjee's first and last published short stories, her neglected nonfiction, and her many essays. Critically situating both well-known and under-discussed texts, this study analyzes the aesthetic and ideological complexity of Mukherjee's writing, considering her sophisticated, erudite, multilayered use of intertextuality, especially her debt to cinema. Maxey argues that understanding the range of formal and stylistic strategies in play is crucial to grasping Mukherjee's work.

Ruth Maxey is an associate professor in modern American literature at the University of Nottingham. She is the author of South Asian Atlantic Literature, 1970-2010, and her articles have appeared in Critique, Textual Practice, Journal of Commonwealth Literature, Cambridge Quarterly, Wasafiri, and South Asian Review, among other journals.

This feature require that you enable JavaScript in your browser.
END_OF_DOCUMENT_TOKEN_TO_BE_REPLACED

This feature require that you enable JavaScript in your browser.
END_OF_DOCUMENT_TOKEN_TO_BE_REPLACED

This feature require that you enable JavaScript in your browser.
END_OF_DOCUMENT_TOKEN_TO_BE_REPLACED