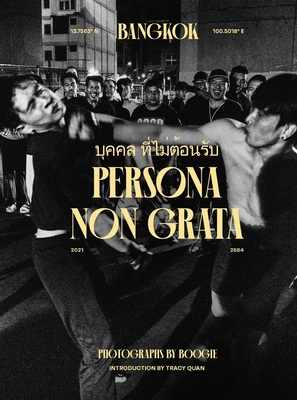 Edgy and gritty albeit stunning photographs revealing and documenting the darker side of Bangkok, Thailand; the Land of Smiles.

What comes to mind when you think of Thailand? For many, it's The Land of Smiles, but that couldn't be further from the truth, in my opinion, at least when you take the time to scratch beneath the surface.

I have to admit that the first time you get there, you can't help but think, "Man, these people discovered some secret to life. Look at them smiling and being nice, almost to the point of submission." But then by the second week of your stay it's clear that most of it is fake!

How could you even think for a moment that they really like us? Look at us: Americans on steroids doing Muay Thai, banging local girls... lost souls trying to find some sense of belonging... old German dudes walking around with really young (or not so young) prostitutes... backpackers with dreadlocks... nothing there to like, and if I were Thai I would be seriously pissed off, which I think they all are, but just brought up not to show it...

It's a strange place. On one hand you have people doing whatever it takes to save face, trying to keep appearances at all times, avoiding any (ANY) kind of confrontation; going so far as to tell you ONLY what you want to hear, no matter how far from the truth it might be... but on the other hand underaged girls are sold into prostitution by their families, without any thought given to it... it's just weird. Or it might be better to say "different"...?

Visually though, it's just stunning. Food is amazing. And the fact that most people don't speak English, or are too shy to even attempt to, makes the whole experience even more intriguing. Another planet...

I researched Thailand extensively, over some ten long trips, mostly focusing on Bangkok. Tried to dig as deeply as possible, not going with the flow, and I think I did a pretty good job.

Born and raised in Belgrade, Serbia, Boogie began photographing rebellion and unrest during the civil war that ravaged his country during the 1990s. Growing up in a war-torn country defined Boogie's style and attraction to the darker side of human existance. He moved to New York City in 1998. He has shot campaigns for high-profile clients and has been published in top fashion publications around the world, and has exhibited widely in the U.S., Europe and Asia. Boogie lives and works between Brooklyn and Belgrade, and is the author of some nine influential photo books, among them is It's All Good (2006, updated 2016), Boogie–the Limited Edition (2007), Belgrade Belongs to Me (2008), and Moscow (2019), all with powerHouse Books.

Tracy Quan's third novel is Diary of a Jetsetting Call Girl, set in Provence and praised in The Nation as a "deft account of occupational rigors and anxieties before the crash." Quan's debut, Diary of a Manhattan Call Girl, and the sequel, Diary of a Married Call Girl, are international bestsellers. She has written for many publications including Cosmopolitan, Marie Claire, Financial Times, New York Times, Truthdig, Reason, and The Daily Beast. She is based in New York.

This feature require that you enable JavaScript in your browser.
END_OF_DOCUMENT_TOKEN_TO_BE_REPLACED

This feature require that you enable JavaScript in your browser.
END_OF_DOCUMENT_TOKEN_TO_BE_REPLACED

This feature require that you enable JavaScript in your browser.
END_OF_DOCUMENT_TOKEN_TO_BE_REPLACED