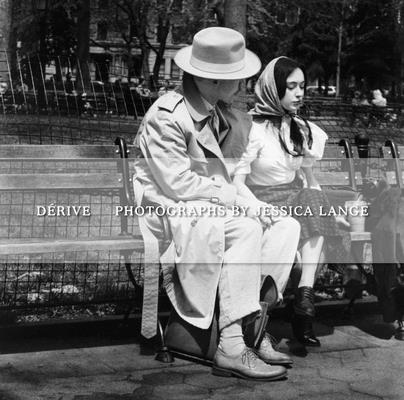 Award-winning actress’ third powerHouse title, a collection of street photography made during the pandemic in New York City; French for “drift.” The title is taken from Guy Debord’s Theory of the Dérive (1956): “In a dérive (unplanned journey) one drops all their usual motives for movement and action and let themselves be drawn by the attractions—usually urban and the encounters they find there.”

Acclaimed actor and photographer Jessica Lange embraced the onslaught of the pandemic and the initial lockdown in New York City in a remarkably intimate and engaging way: having been tempted to read French philosopher Guy Debord’s landmark text, Theory of the Dérive, (drift), she set out any given day with no destination, no purpose in mind, and observed and engaged in (photographed) what prompted her. The results of these excursions and purposeful, intellectual drifting are gathered in her third powerHouse Books volume, Dérive, at once her most audacious and most ambitious photography project to date: gloriously empty streets, mysteriously bustling with compositional energy; perfectly poised individuals, captured as if unwitting extras staged on set; vivid chiaroscuro, voluminous in a wide-pan tableau. New York City was empty in the first few days of the pandemic, but its bones have never been documented in such a manner before Jessica Lange’s masterful eye.

Jessica Lange is the 13th actress to achieve the Triple Crown of Acting, having won two Academy Awards, three Primetime Emmy Awards, and a Tony Award, along with a Screen Actors Guild Award and five Golden Globe Awards.  She won an Emmy for her portrayal of Big Edie in HBO’s Grey Gardens; Critics Choice, Golden Globe, Dorian and Emmy awards followed for American Horror Story; her first Tony for Lead Actress, Outer Critics Circle and Drama Desk Award for Outstanding Actress in a Play for the Broadway Revival Long Day’s Journey Into Night; an 8th Emmy for her portrayal of Joan Crawford in the miniseries Feud; and in 2019 she received her 10th Emmy nomination for her work in American Horror Story: Apocalypse.  Lange is also a renowned photographer with four published books of photography, two published by powerHouse Books: 50 Photographs (2008), and Highway 61 (2019). Born in Minnesota, Lange currently resides in New York City.

This feature require that you enable JavaScript in your browser.
END_OF_DOCUMENT_TOKEN_TO_BE_REPLACED

This feature require that you enable JavaScript in your browser.
END_OF_DOCUMENT_TOKEN_TO_BE_REPLACED

This feature require that you enable JavaScript in your browser.
END_OF_DOCUMENT_TOKEN_TO_BE_REPLACED