In A Time of Panthers: Early Photographs (Hardcover) 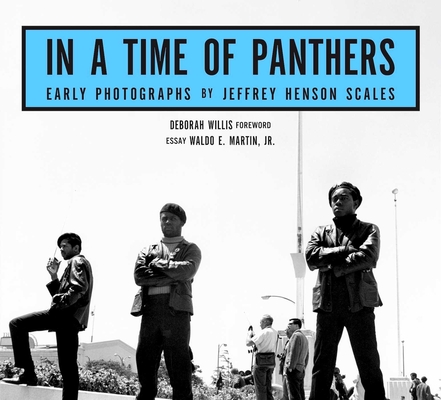 Newly discovered archive of photographer and Oakland native Jeffrey Henson containing origin story photos of the emergence of the Black Panther Party in the 60s; rare and intimate portraits of the movement’s leaders in action and in repose, featuring epic images of history’s most influential African American activists.

Few photographers had the insider access Oakland native Jeffrey Henson Scales did around the Black Panther Party in the late 1960s. Capturing intimate portraits and protest images of the organization and its leaders in a time of societal upheaval, Scales archive lay dormant and forgotten for some 50 years. Then in 2018, when his mother died and the contents of the family home were sorted, the negatives were discovered. Fast forward to today’s national racial justice dialogues, the death of several Black men at the hands of police and vigilantes, and the rise of the Black Lives Matter movement, “A new urgency to these images and the original Civil Rights Movement takes root in context of today’s ongoing struggle for racial justice,” Scales said about the trove of historical material. “These images serve as a time capsule of sorts, not only of my adolescence and political awakening, but also for the country whose ongoing struggle with racial inequality, police brutality and resistance is as urgent and timely as ever.”

A photography editor at the New York Times and teacher of photojournalism at New York University, Jeffery Henson Scales grew up in Oakland, and as a son of activists, became known in around Panther circles in the 60s. His documentary photographs have been exhibited at museums throughout the United States and Europe and have appeared in numerous photography magazines, books, and anthologies. His photographs are in the permanent collections of The Museum of Modern Art, The Museum of Fine Arts, Houston, The City Museum of New York, The George Eastman House, Minneapolis Institute of Art, Weisman Museum of Art, Minneapolis, Newfields at the Indianapolis Museum of Art, and The Baltimore Museum of Art. A one-person major exhibition, Pictures from America, sponsored by The Visual Studies Workshop in Rochester, New York, traveled throughout the United States from 1996 to 2001.

Scales is also an award-winning editor who curates The New York Times photography column, “Exposures,” and is co-editor of the annual “Year in Pictures” special section. He is also an adjunct professor at NYU’s Tisch School of The Arts, teaching photojournalism there since 2006. His most recent book House documents life in a legendary Harlem barbershop over the course of six years.

As an artist, author and curator, Deb Willis's art and pioneering research has focused on cultural histories envisioning the black body, women and gender. She is a celebrated photographer, acclaimed historian of photography, MacArthur and Guggenheim Fellow, and University Professor and Chair of the Department of Photography & Imaging at the Tisch School of the Arts at New York University.

Willis received the NAACP Image Award in 2014 for her co-authored book Envisioning Emancipation: Black Americans and the End of Slavery (with Barbara Krauthamer) and in 2015 for the documentary Through a Lens Darkly, inspired by her book Reflections in Black: A History of Black Photographers 1840 to the Present.

Waldo E. Martin Jr. is a professor of history at the University of California, Berkeley. His scholarly and teaching interests include modern American history and culture with an emphasis on the nineteenth and twentieth centuries; his principal areas of research and writing are African American intellectual and cultural history. He is the author of "A Change is Gonna Come": Black Movement, Culture, and the Transformation of America 1945-1975 (forthcoming) and The Mind of Frederick Douglass (1985); he coedited, with Patricia Sullivan, The Encyclopedia of Civil Rights in the Untied States (forthcoming). Martin has published numerous articles and lectured widely on Frederick Douglass and on modern African American cultural and intellectual history.

This feature require that you enable JavaScript in your browser.
END_OF_DOCUMENT_TOKEN_TO_BE_REPLACED

This feature require that you enable JavaScript in your browser.
END_OF_DOCUMENT_TOKEN_TO_BE_REPLACED

This feature require that you enable JavaScript in your browser.
END_OF_DOCUMENT_TOKEN_TO_BE_REPLACED