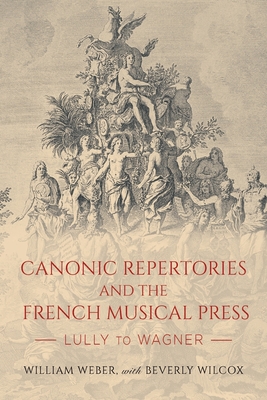 A bold application of the concept of "canonical" works to the development of French operatic and concert life in the eighteenth and nineteenth centuries. This long-awaited book by a leading historian of European music life offers a fresh reading of concert and operatic life by showing how certain musical works in eighteenth- and nineteenth-century France came to be considered "canonic" that is, admirable and worthy of being taken as models. In a series of interlinked essays, William Weber draws particular attention to the ways in which such reputations could shift in different eras and circumstances. The first chapter outlines how such a surge of reputation came about for Jean-Baptiste Lully after his death in 1687, followed a century later by one for the operas of Christoph-Willibald Gluck and Niccol Piccinni. Next, Beverly Wilcox contributes a crucial chapter exploring how a canon of sacred works evolved at the Concert Spirituel between 1725 and 1790. Subsequent chapters detail the rise of an "incipient canon" for Joseph Haydn's music in the 1780s; a new operatic canon centered on works of Gioachino Rossini and Giacomo Meyerbeer; a century-long canonic repertory at the theater of the Op ra-Comique; and, between 1860 and 1914, frequent concert performances of excerpts from Wagner's operas, sometimes along with excerpts from Meyerbeer's. Throughout, Weber and Wilcox demonstrate how the French musical press reflected musical taste, and also shaped it, across two centuries.

This feature require that you enable JavaScript in your browser.
END_OF_DOCUMENT_TOKEN_TO_BE_REPLACED

This feature require that you enable JavaScript in your browser.
END_OF_DOCUMENT_TOKEN_TO_BE_REPLACED

This feature require that you enable JavaScript in your browser.
END_OF_DOCUMENT_TOKEN_TO_BE_REPLACED