Cats in the City of Plague (Hardcover) 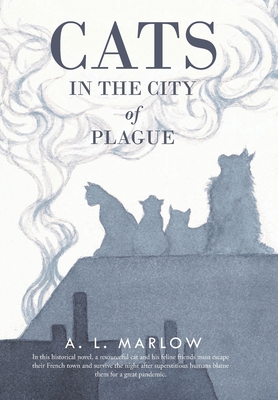 Fans of Tad Williams's Tailchaser's Song and Richard Adams's Watership Down, add Cats in the City of Plague to your list of favorite books.

Set amidst the chaos of the worst pandemic in history, the Black Death of the 14th century, Cats in the City of Plague tells the tale of a group of cats who are unfairly blamed for the plague.

The main character, Leander, and his fellow cats cannot understand why people they have trusted have turned against them. But they realize that their only hope of survival is to escape from the French city that has long been their home and return to the forests where, cat legend has it, their kind originally lived.

While evading the humans who seek to destroy them, the cats embark on what Booklife calls "a tense and dramatic journey through the city, powered by the danger and sacrifice inherent in tales of epic quests."

Racing over rooftops, hiding in the cathedral's crypt, can they make it out of the city before dawn reveals them? And if they do make it, can these city cats learn to live in the wild?

The setting of a great pandemic will resonate with modern readers, but it's the flight of these intrepid cats that makes Cats in the City of Plague an unforgettable story.

This feature require that you enable JavaScript in your browser.
END_OF_DOCUMENT_TOKEN_TO_BE_REPLACED

This feature require that you enable JavaScript in your browser.
END_OF_DOCUMENT_TOKEN_TO_BE_REPLACED

This feature require that you enable JavaScript in your browser.
END_OF_DOCUMENT_TOKEN_TO_BE_REPLACED